Former Soviet President Mikhail Gorbachev rose to the occasion to defend President Putin’s domestic policies as he spoke in Berlin last week. Gorbachev arrived in Germany to receive the Friedrich Joseph Haas prize. It is unclear whether Gorbachev planned to speak out on the subject or his comments were offhand. The former Soviet president stood up for the Kremlin policies following the remarks by former president of the German Bundestag, who accused Moscow of backtracking to “authoritarianism and suppression of democracy.” 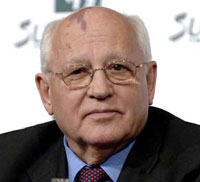 “It’s worth taking a look back at the situation in Russia at a time when Putin came to power. The country was in a shambles. There was no such thing as the constitution in the regions. The oil tycoons were ripping Russia’s wealth right, left and center. And they were hiding their huge profits in offshore accounts. The country’s system of higher and school education was falling apart. Sure thing, there are some shortcomings and negative trends. Democracy is a good thing, no doubt about. But the government should satisfy the basic needs of the citizens – that’s a top priority. If authoritarianism is required to do the job, I’m ready to give my full support to this kind of authoritarianism,” said Gorbachev.

Russia’s next presidential election will take place next year. Vladimir Putin has repeatedly stated that he was not going to run for president for a third term because it is against the Russian constitution.

Gorbachev said than not unlike most Russians he was grateful to Putin for putting things back in order, for restoring the constitution and reviving the economy.

“The dissenters have always been around. They’re now and they’ll always be. There’re dissenters in your country too,” Gorbachev concluded triumphantly.

As regards independence of the Russian media, half of the country’s newspapers are presently owned by Western companies, according to Gorbachev. Therefore, critics are not in short supply, said he. At the same time, Gorbachev expressed concern about the Russian TV, which is awash with soap operas.