This year IDET, probably one of the largest military exhibitions in Eastern Europe, hosted exhibitors from over 30 countries. To a point this exhibition is unique. It takes place in the center of the region which is in a transition period from soviet made military hardware to NATO standards. Keeping in mind the lifetime of the arms and equipment it can be stated that this process will last for the foreseeable future. Moreover, the transition to NATO standards is spreading into new countries. 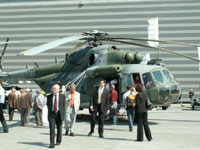 IDET-2007 took place shortly after the government of the Czech Republic approved the package of agreements on military-technical cooperation with Russia. First of all it concerns the project of modernizing the Russian made helicopters of the Czech Air Force. The agreement assumes protection of intellectual rights for the Russian party and modernization guarantees to the Czechs. Russia is to provide technical documentations and experts for modernization. Czech party will be free to choose the suppliers of spare parts and equipment. Prague evaluates the payments for the Russian copyrights and technologies at about several million dollars. Today Czech Air Force operates combat helicopters Mi-35 and combat - transport Mi-171. Besides, there are older models of Russian and Soviet designs.

As the representative of the Czech Air Force Richard Skacel told the correspondent of Pravda.Ru, Russian combat (pic0016) and transport (pic0017) helicopters were displayed at IDET “just for demonstration”. So far the helicopters are within the guarantee period (18 months) and no technical interference is allowed without the consent of the designers. After the guarantee period Czech Air Force will have “just to inform” the manufacturer of the new equipment which may be chosen for installing on the helicopters. As of today approximately 50% of the inputs correspond to the NATO standards. Most likely in the future the Ulan-Ude made helicopters will get Israeli or British avionics.

Prague plans to start modernization with the military-transport helicopters. Maybe the one on the picture by Pravda.Ru will join NATO forces in Afghanistan in 2009, according to Mr.Skacel. Totally it is planned that about 4-10 Czech helicopters will participate in the campaign in Afghanistan. It continues one noteworthy statistics: only Russia has helicopter model which participated in all regional conflicts at least on one side. This is a proof of the unique performance and no-match price-efficiency ratio, which is declared by the independent military experts in the absence of the representatives of Russian industry.

One should not underestimate the level of cooperation between Russia and its former “small allies” like Czech Republic. Czech company "ALTA", for example, is going to credit a 1 billion EUR technology upgrade project at Uralwagonzavod, the leader of the Russia’s newly created tank holding. The first frame agreement for the sum of 300 million EUR was signed last March, during the visit to Prague of the Russian President Vladimir Putin. On April, 27th this year the plan received additional 700 million EUR. This is the largest machine-building contract in the history of the Czech-Russian relations. According to the chairman of the board of "ALTA" Vladimir Plashil the allocated means will be spent on modernizing the industrial equipment of Uralwagonzavod, including metallurgical, foundry and metal processing lines. According to Russian estimations it will take 3—4 years to spend the first part of the credit (300 million EUR). Fulfilling the projects financed by the second part will take 6—7 years more. The evaluated pay off deadline is 2020.

It seems that the business of the Czeck companies in Russia and India is at least not worse than with the new NATO partners. Unfriendly take over of the Czech AERO Vodohody by Boeing is a vivid example how the national industries in Eastern Europe were sacrificed to the membership in NATO. Vodohody used to supply training jets to the Warsaw Treaty nations in hundreds. This market is unreservedly lost. It is highly likely that Vodohody will be able to sell their new 159 series jets in more or less significant numbers even in the third countries. This market will be dominated by the Italian, British and Russian trainers. According to the source of PravdaRu today Vodohody is making spares for Sikorsky. Probably there will be enough orders from the US just to keep the company alive, but it is tempting to bet that we won’t hear AERO Vodohody among the aircraft-building leaders.

Another Czech manufacturing giant TATRA proves that the deals in the East are much more advantageous than with the new Western partners. The representative of TATRA J. Richter told the correspondent of PravdaRu that as of today TATRA is the most popular foreign truck in India. TATRA already delivered several hundreds vehicles ready or for assembly. In the West, on the contrary, there has been no information about any reasonable big contracts for TATRA from NATO customers. It is tempting to bet there will be nothing ahead too. No wonder, this is a realm of German, French, Swedish and other “own” manufacturers. According to Mr. Richter TATRA has stable relations with both Russian and Indian partners.

Czechs send their vehicles to Russia to prepare for the installation of the Russian Smerch missiles delivered to India. Noteworthy, this successful cooperation takes place in the conditions when another Russian truck manufacturer KAMAZ is establishing a joint venture in India. Mr. Richter refused to say what could be the next customer for the link Russian missile – Czech chassis, but it seems to last in India. According to the well-informed contact of PravdaRu one of the fundamental reasons for that is that Indian business owns a considerable share in TATRA. This is a far more substantial argument than the publicly claimed technical superiority of the Czech made independent suspensions over their Russian matches.

The show program of IDET this year was merely nothing. Even the tiny outdoor area with practically no infrastructure could have hosted far more interesting demonstrations than actually took place. IDET seems to become too specialized and too regional. Maybe this is why this year neither Rosoboronexport nor any individual Russian arms maker appeared in Brno. Another possible reason is that ROE plans participation in another East European military exhibition MILEX, to be held on May, 22-25 in Minsk (Belarus) and “own” VTTV in the Siberian city of Omsk on June, 5-9. See our reports from MILEX and VTTV shortly.