The government of Estonia (one of the three Baltic states, a former republic of the Soviet Union) has launched the campaign to dismantle the Bronze Soldier monument in its capital, Tallinn. The common grave of Soviet warriors, which is situated underneath the monument is said to be excavated and removed as well. 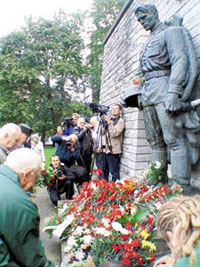 Activists of Night Watch public organization, who stand on duty guarding the monument, said the police forced them to leave the area near the monument. The activists showed resistance to the police. One woman was hospitalized with head injury as a result of the clash. The Estonian police encircled the Bronze Soldier and lined up the nearby streets blocking access to the monument.

The Defense Ministry of Estonia officially announced about the beginning of the works to identify those buried in the common grave underneath the memorial.

Remains of 13 Soviet warriors that were killed during the liberation of Estonia from Nazi troops in the autumn of 1944 were put to rest in the common grave in 1947. Estonia currently has about 450 burial places where about 50,000 Soviet soldiers were buried.

Spokesmen for the Defense Ministry of Estonia said that the identification of the human remains buried underneath the Bronze Soldier would be conducted in compliance with international agreements and traditions.

An official spokesman for the Foreign Affairs Ministry of Russia, Mikhail Kamynin, harshly criticized the intentions of the Estonian authorities pertaining to the Soviet monument in Tallin.

“We consider the actions of the Estonian government as an intention to rewrite the lessons of the World War Two, not to mention the fact that everything happening with the monument and the people buried underneath can only be described as an inhuman action,” Kamynin told Interfax.

“Of course it will be taken into consideration as far as our future relations with Estonia are concerned,” the official added.

Andrus Ansip, the Prime Minister of Estonia, stated earlier that the monument to the Soviet Warrior the Liberator (The Bronze Soldier) would not be dismantled before May 9, the Victory Day. The PM stressed out that the authorities were pending the question about the excavation of the common grave and the identification of human remains.

“The Bronze Soldier will be standing on its place on May 8 and May 9. It is impossible to finish the works within such a short period of time. Most likely, the remains and the monument will be sent to the Military Graveyard and will be stored there for good,” the official said.

The Prime Minister of Estonia went too far desecrating the memory of Soviet soldiers who liberated Estonia from fascism. The minister said that the common grave underneath the Bronze Soldier contains the remains of two soldiers who had been run over by their own tank. The two soldiers, the minister added, were killed so in a state of alcoholic intoxication in September of 1944.

Say what you want on Pravda.ru forum. Speak your mind!