U.S. Trade Representative Susan Schwab said on Monday that repealing the Jackson-Vanik amendment against Russia would be “premature.” The amendment was passed by U.S. Congress in 1974 in response to restrictions imposed by Soviet authorities on the emigration of Jews from the country. The legislation, a Cold War holdover, has been inhibiting Russian-U.S. trade since 1970s. The Jackson-Vanik amendment still ties bilateral trade to emigration restrictions, which have long been gone following the collapse of the Soviet Union in 1991. Every year U.S. president issues a decree to suspend the legislation that is still formally in force. 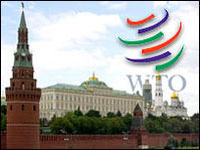 Speaking at a press conference in Washington, Schwab told the journalists that repealing the amendment would be premature because Russia was making “slow progress” in its bid to join the WTO. “The question that I get asked when it comes to Jackson-Vanik and permanent normal trade relations with Russia is whether the WTO is ready to let Russia in. The answer is: ‘Not yet,’” she said. Schwab craftily made no reference to the year when the amendment was enacted: 1974. It was the time when the signing of the General Agreement on Tariffs and Trade (which evolved in the WTO in 1995) by the Soviet Union was completely out of the question. The Soviet Union became an observer with the GATT only in 1990.

During his visit to Moscow in February, U.S. Congressman Tom Lantos, chairman of the House of Representatives Foreign Committee, spoke in favor of lifting the amendment as soon as possible so that “our two great nations may maintain cooperation in the spirit of constructiveness and harmony”. The Democratic majority of the U.S. Congress did not seem to share Lantos’ optimistic view on the issue. Incidentally, Lantos is a Democrat and outspoken critic of Russian authorities.

U.S. Secretary of Commerce Carlos M. Gutierrez said last week that the decision to annul the amendment would be passed by U.S. Congress in the “near future.” Gutierrez confirmed that “U.S. administration has clearly expressed its intention to repeal the amendment.” He added that the “amendment will be canceled soon because Russia is pushing for WTO membership, which simply can’t happen as long as the amendment is effective.” In light of the recent statement by Schwab, Gutierrez’s comments seem to be rather precipitate.

Konstantin Kosachev, head of the State Duma’s committee for foreign affairs, was surprised to learn of Schwab’s statement. According to him, “issues relating to the amendment pertain solely to the legislature, and therefore the case falls within the jurisdiction of U.S. Congress.” Kosachev expressed hope that the White House would denounce Schwab’s statement, which he believed hinted at “some game of political brinkmanship.”

Nikolai Zlobin, directorof RussiaandAsia programs at the Washington-based Institute of Global Security Studies, is confident that the United States is not in a hurry to cancel the Jackson-Vanik amendment, for a number of reasons. The reasons are not directly related to Russia. “First, the matter is not essential per se because U.S. president suspends the amendment every year anyway. Second, most U.S. congressmen have only a vague idea of the amendment,” Zlobin said, in an interview to Vremya Novostei. “Most congressmen just can’t understand the reason why they should give up doing more important things and get down to that obsolete amendment instead. They’d have to read lots of documents prior to making a decision on the issue. Congressmen don’t have time for doing so. They may as well be a bit lazy for that matter. Besides, the agenda of congressional sessions is made up for a six-month period beforehand,” Zlobin said.

There is yet another problem. “The White House and U.S. Congress in particular do understand that the amendment is one of the last levers still available for putting pressure on Russia.

Once the amendment is canceled, the United States will be no longer able to dictate terms in a number of areas, especially in the area of enforcement of intellectual property rights,” Zlobin said. According to him, the United States has already run into trouble with China after taking it at its word. Washington granted China a most favored nation treatment in trade. China joined the WTO in 2001 yet “the Chinese never kept their promise when it comes to a crackdown on pirated DVDs and software. Now America has no lever for putting pressure on China any more. Many people in the United States fear that Russia may be a source of similar trouble. Protection of intellectual property rights is a very sensitive issue for U.S. Congress because pirated copies of U.S. movies, music and software pose a real threat to each U.S. constituency. In other words, piracy results in lost profits and layoffs for the United States,” Zlobin said.

Speaking at the press conference on Monday, U.S. Trade Representative Susan Schwab lashed out at China for its failure to curb piracy, whose level remains “unacceptably high.” Schwab announced that the United States was filing a formal complaint against China at the WTO. A representative of China’s national office for intellectual property called U.S. decision an “unwise move.” The representative went on to call the decision as being “in complete disregard of giant efforts by the Chinese government which made great achievements while implementing measures to enforce intellectual property rights and strengthen legal framework in the area of copyright protection.”

Sya what you think on Pravda.ru Forum