The Moscow City Court confirmed the guilt of the former head of the Russian oil giant Yukos and his business partner Platon Lebedev on almost all counts of the indictment. However, the court changed its decision on only one episode of the sentence. It goes about the misappropriation of funds for the benefit of another oligarch, Vladimir Gusinsky. These charges were withdrawn in the absence of corpus delicti. As a result, the court cut the prison sentence for Mikhail Khodorkovsky and Platon Lebedev to eight years. 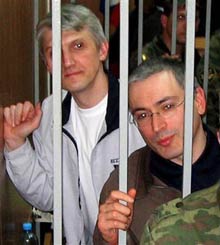 The sentence has come into effect. The court also mitigated the punishment for the former general director of the company Volna, Andrey Krainov, who was also involved in the Khodorkovsky case. Krainov was sentenced to 4.5 years on parole.

The prosecutors were satisfied with the decision of the court. “The court considered the sentence legal, reasonable and just. That is why we are satisfied with the court's decision on the whole,” prosecutor Dmitry Shokhin said. The materials of the case give every reason to affirm that the sentence strictly complies with all requirements of the law, the prosecutor believes. Shokhin added though that it was up to the court to decide whether the prison term for Khodorkovsky and Lebedev should be shortened or not.

Mikhail Khodorkovsky decided not to lose a chance to release a public statement on the matter. His speech was filled with accusations and elevated emotional content. As a matter of fact, the former oligarch did not say anything special in his 80-minute speech. “Mr. Khodorkovsky's demagogical and profuse talk is obviously meant to create the image of a persecuted individual,” RIA Novosti quoted Dmitry Shokhin as saying.

The court session was rather long and intense. Khodorkovsky and his lawyers were doing their best to drag time. They particularly said that the defendant needed several days to review volumes of appeals. Furthermore, the lawyers originally refused to defend their client. Genrikh Padva was the only Khodorkovsky's lawyer, who contracted a defense agreement with the defendant. However, Mr.Padva was hospitalized last Monday for a regular medical examination. Other lawyers of Yukos's former CEO said they were incompetent in the case and suggested delaying the appeal for a month or two and wait for Genrikh Padva to discharge from the hospital.

When it became known that the court intended to appoint new lawyers for Mr. Khodorkovsky, Genrikh Padva eventually had to appear in the court room to participate in yesterday's session.

Mikhail Khodorkovsky and Platon Lebedev are currently expected to be delivered to a penitentiary institution. The sentence is thus considered confirmed; any possible further appeals of the sentence will be taking place in supervisory agencies. Khodorkovsky and Lebedev's lawyers intend to appeal against the sentence at a supervisory instance and at the Strasbourg-based European Court for Human Rights.

The lawyers say that they did not even hope for the Moscow City Court to make a positive decision for them. A foreign lawyer of the convicted Russian oligarch said that the court appeal was only supposed to become a springboard for other complaints submitted to international courts. It is worth mentioning in this respect that decisions of international courts can be interpreted as recommendations only. International courts are therefore used as a tribune.

Lawyers and observers currently dwell upon a possible date for Mikhail Khodorkovsky and Platon Lebedev to be released on parole ahead of the scheduled time. The followers of the former oligarch say that Mr. Khodorkovsky could be released in the summer of 2007, when he finishes serving the first half of his sentence. It would also give him an opportunity to participate in the presidential election of 2008. Legal experts believe, however, that such an early release would not be possible: because of severe crimes Khodorkovsky would have to serve at least two-third of his sentence before such a possibility could emerge (the two-third of the sentence will expire in the beginning of 2009).

It goes without saying that Mikhail Khodorkovsky's followers will stick to their opinion to be able to crack down on Russian authorities in 2008 (the year when Russians will go to the polls to elect the new president).

It became the second sentence in the notorious Yukos case. On March 30 the Moscow City Court sentenced the head of the Yukos security department, Aleksey Pichugin, to 20 years in prison. The jury found Pichugin guilty of killing two residents of the city of Tambov, Olga and Sergey Gorins, in 2002, the attempted murder of Moscow government's PR head Olga Kostina and of Rosprom Managing Director Sergey Kolesov.