At the Aircraft Interiors Expo 2007 (to be held on April, 17,18,19 in Hamburg, Germany) KVAND will present ideas on refurbishing passenger planes Fokker-100 into business jets. The project provides for using all newest developments of the design-bureau of the company, “active engineering”, the newest technologies of diode illumination and exclusive furniture. Noteworthy, KVAND won the tender on developing the interior for the aircraft MS-21, the so called “aircraft of the 21st century”, which is to come next to Super Jet-100, which is just nearing serial manufacturing. MS-21 is considered as the aircraft which will strengthen Russia’s return in the international civil aviation market. 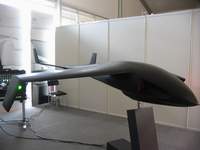 However, few people know that KVAND is active in the niche of the unmanned aerial vehicles (UAVs). Two years ago it made a fuss at MAKS show with its no-match Shtil-3, which appeared all of a sudden from nowhere. Nobody could expect a development of this kind from this company. The UAV was studied by the surprised military attaches of the US and other Embassies. Shtil was a totally private initiative, which had been made under the assumption that it should find customers because it is no-match nature.

Shtil has aircraft and helicopter type automatic and manual take off and landing. Very important is that the UAV uses the jet engine. With the aircraft type take off the payload can be up to 100kg, helicopter –20kg. The hull is made of composite materials reducing its radio visibility. Independent experts believe that such performance and complexity may be demanded only by the militaries: length - 3,15m; height - 0,95m; wing span - 2,98m; chassis - 4 removable; altitude – 50-9000m; speed – up to 780 km/h; range - 500 km. The chairman of the board of KVAND Oleg Ponomarev thinks that the UAV can be modified into a number of models best meeting the requirements of specific customers in many industries.

Early this year KVAND demonstrated another UAV looking like a flying sauce of the future. Today this helicopter type UAV is still a flying model, which made first flights and corresponds to certain characteristics, which were set by the undisclosed client.