On March 21 Russia mourns victims of three terrible disasters that occurred one after another during the recent several days in different regions of the country. Tu-134 passenger jetliner cracked and burst into flames during emergency landing on March 17 at the airport of Samara. On March 19 a methane gas explosion ripped through the Ulyanovskaya coal mine on the outskirts of the city of Novokuznetsk. Over 200 miners were working in the mine during the moment of the explosion. On March 20 a fire broke out at the nursing home in the Krasnodar region of Russia, killing more than 60 elderly people. 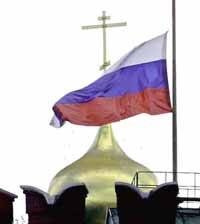 At least 176 people have been killed in the three tragedies. The number of victims may continue to grow as many of the injured were hospitalized in severe condition or are still missing. The plane crash and the nursing home fire ended up with six and 63 deaths respectively. However, the death toll of the Siberian mine explosion continues to grow. Rescuers retrieved 107 bodies from the destroyed and half-flooded coal mine yesterday. Several miners are still missing.

Yesterday, President Putin started the session of the committee for defense cooperation with a speech about the tragic events. The president offered to honor the memory of the killed people with a moment of silence. Putin ordered Prime Minister Mikhail Fradkov to supervise the investigation of the tragedies. Putin also signed a decree declaring March 21 the mourning day in Russia. The leaders of Belarus, Ukraine, Greece, Baltic and other countries sent their condolences to the Russian president.

The fact that the three tragedies occurred one after another does not imply anything supernatural. It was obviously a mere coincidence. The catastrophes have not set a death toll record over the recent several decades in Russia. Similar accidents occurred last year too: the collapse of the market roof in Moscow’s central area, air crashes in Irkutsk and Donetsk and a fire at a Moscow drug hospital. However, one has to admit that news reports about dozens and hundreds of victims have become a part of common life in present-day Russia, the Vremya Novostei newspaper said.

Judging upon the recent events, Russia needs to conduct profound activities to improve the situation in the fields of aviation, construction and supervision of building exploitation, coal industry and fire security.

Based on news reports of Russian mass media