Russia has all chances to become the last nation of the world to join the WTO. It turns out that according to the US assessment (the last nation which disagrees with Russia’s joining this organization) Russia has less features of market economy and democracy than tens of the mid-ages regimes of Asia and Africa which have nothing to do neither with the former nor with the latter, but nevertheless enjoy the benefits of the membership. 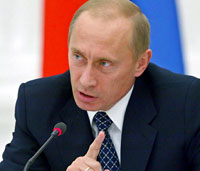 What is Russia accused of? Violation of intellectual rights. Point number one is illegal CDs and DVDs. Yes, its true, but this problem does not exist just in Russia. On the other hand Russian authorities and even NGOs have demonstrated the determination to suppress pirates. One cannot expect that such a task can be achieved overnight, as CDs can be copied in the most primitive conditions, on a laptop in the kitchen.

At the same time the East European nations that managed to take over Russia on the way to “economic justice and democracy” (WTO) openly suggest pirated products at the international military exhibitions. Bulgarian Kalashnikov machine guns, Polish missiles Osa and Kub made under the expired soviet licenses is a vivid example of the straightforward violation of the international laws on intellectual rights. (Here we did not intend to name all pirates in this sphere located all around the world. There are more examples of how “better civilized” nations of the WTO enjoy profiting on pirating the products of “less civilized nations”).

Certainly the Kalashnikov machine gun is the most notorious case. Nearly everybody in this world heard of this name, several nations have the machine gun on their coat of arms, the turnover of this business is counted in billions, American soldiers used this type of arms in Vietnam and Iraq. There is, probably, no expert who would not know about this particular problem. However, all claims and appeals of Russia remain unanswered.

Any talks about Russia’s alleged mismatching the WTO standards is nothing by the deliberate policy to prolong as much as possible the situation whereby members can profit on non-members. Some accusations of Russia’s “wrong attitude” have nothing to do with common sense. Isn’t it ridiculous to blame Russians who refuse to eat American poultry produced according to the US, not Russian standards, especially if this poultry really tastes like a cocktail of antibiotics? The trait phrases about fair market in this situation can be sold either to totally ignorant people or interested parties. Produce what we need, but not what you can. This will be a fair competition for our market.

The only reason why Russia still remains outside the WTO is the fact that Russia is a state capable of really fair competition with the world’s leading nations practically in any sphere, including hi-tech and strategic industries. One may smile about the current status of the Russian economy, but if we keep in mind not the temporal properties but principal potential, it becomes clear why the rulers of the WTO do their utmost to delay the fair competition with Russia. All nations-consumers were accepted in the WTO with absolute negligence to the matching criteria. Russia, which de facto used to correspond to the requirements of the WTO years ago is still an outsider…