Russia's defense budget in 2006 will give first priority to the development of the national Air Force and the Anti-Aircraft Defense. Russia's Minister for Defense, Sergei Ivanov, told reporters after he returned to Moscow from China that the real defense budget of Russia was gaining about ten percent during the recent five years, although the state budget of Russia did not become militarized. 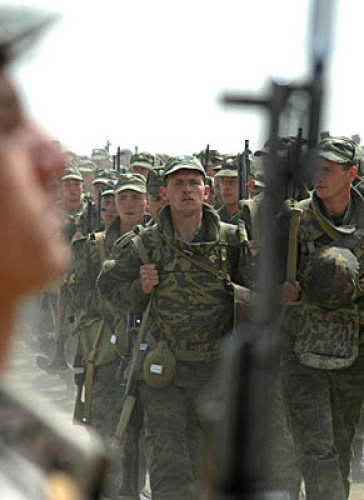 ”Judging upon the capacity of our defense budget, Russia stands alongside with NATO states. However, we need to maintain balance between the spending on military machines and the social support, or there will be no one to work on those machines otherwise,” the minister said. “The priority in the defense budget 2006 will be given to Air Force and the Anti-Aircraft Defense,” Sergei Ivanov said. The minister added that about ten percent of the budget will be spent on space technologies, particularly on the completion of the deployment of the Global Navigation Satellite System known as GLONASS.

The minister criticized certain enterprises of the Russian defense complex and cast doubts on their abilities to produce the defense technology, which Russia needed. “We need cheaper and better technologies,” Ivanov said.

Commenting on the successful launch of the Dnepr booster from the Baikonur spaceport (the rocket is based on the intercontinental ballistic missile RS-20, or Satan, on the Western classification), the minister said that RS-20 would serve Russia for long. “The practice, which was common in the USSR, when one company was making missiles for the navy and another one was busy with making missiles for land troops, will not be repeated in present-day Russia. I will not let it happen. State funds will not be wasted. As for RS-20 missile, it will stay in Russia's arsenal for long. We currently launch only expired missiles. Such launches let us check the reliability of missile complexes and save funds that would be required for decommissioning works. To crown it all, such launches bring financial profits too,” Minister Sergei Ivanov told reporters.

Speaking about the completed Russian-Chinese military exercise, Peace Mission 2005, the minister said that bad weather conditions on August 24 made naval specialists take much effort to act according to security regulations. “If the sea were just a little rougher, me and my Chinese colleague would have to stop or even cancel the operation. However, I was very pleased to see that the task had been executed even under such difficult weather conditions,” the minister said.

”The exercise showed that Russia had been prepared for the maneuvers very well. The troops landed in an unknown area and exercised high professionalism. I can say this without any boasting. The more military exercises we conduct, the more order we have in the Armed Forces of Russia,” the minister concluded.

According to Sergei Ivanov, the military exercise cost very little for the Russian budget. “You can calculate it yourself. There were five Il-76 planes. The planes, which flew to China from the Far East of Russia cost very little, for those were only two-hour flights. There was a certain spending on fuel for vessels, but it was a meager sum for the budget,” Sergei Ivanov said.