The Russian aviation industry currently experiences a serious scandal. Russia's air giant, Aeroflot, suffers huge losses because of interrupted Il-96-300 flights. The losses can be evaluated at $20 million already by November of the current year. 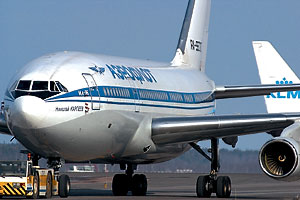 Aeroflot canceled all flights to Hanoi and a certain part of flights to Beijing, Seoul, Toronto and Washington from August 22. The decision was made on recommendations of the Federal Service for Transport Control, which was concerned about frequent accidents connected with technical flaws of the Ilyushin-96-300 airliners.

The Federal Agency for Industry supported the decision of the above-mentioned committee and said that about 19 various damages had been registered with the Il-96-300 type of planes from 1993 to 2005. A recent incident in Finland, when the Il-96 of the Russian president failed to take off, played an important role in the decision to suspend the flights of the jetliner. When Vladimir Putin finished his meeting with the President of Finland, Tarja Halonen, the Russian delegation boarded the plane (Il-96) and prepared to fly home to Moscow. The airliner, however, failed to take off and had to return to the site of the start ten minutes later. All the passengers, including President Putin, had to disembark and board another plane.

Experts concluded that all technical incidents had been caused with the malfunction of the undercarriage braking system, particularly with the UG-151 unit used in the system. The head of the Russian Agency of Industry, Boris Alyoshin, said that specialists of the agency were trying to find out the nature of technical malfunctions of Il-96 airliners. “We believe that all the incidents happened because of production spoilage,” said he.

As a result, Aeroflot decided to bar Il-96-300 planes from flying and use other types of airliners instead. It is worth mentioning that Il-96 airliners comprise 40 percent of Aeroflot's fleet of long-distance aircraft. The major Russian air carrier therefore faces the risk of running huge losses. Spokespeople for Aeroflot's management said that the airline would probably decide to sue the maker of Il-96.

Viktor Livanov, the General Director of the Ilyushin Aviation Complex, believes that there is no need to suspend flights of all Il-96 planes on account of only one brake failure incident. Mr. Livanov told RIA Novosti that specialists had already starting working to correct the defect.

Il-96-300 is a long-distance wide-body passenger airliner. The plane, developed in 1978, has been used in the Russian air fleet since 1993. The plane is meant to carry both passengers and cargoes at long-distance air routes (up to 11,000 km).