Israel is likely to cancel visas with Russia in the future

Israel simplifies the visa entry regime for Russian citizens. New rules are supposed to ease the lives of both tourists and entrepreneurs. Spokespeople for the Israeli government say that the complete abolishment of visas with Russia is quite possible in the future too. 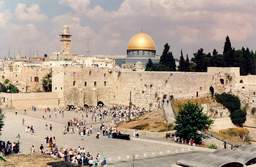 The simplification of the visa entry regime and the destruction of all legal barriers on the way should be preceded with an official meeting between ministers for internal, foreign affairs, as well as a minister for tourism. It is quite possible in theory, although it is a head of state, who is supposed to give a start to cooperation between high-ranking officials. The incentive was given at the meeting between President Vladimir Putin and Israeli Prime Minister Ariel Sharon in April. Israel has become closer to Russia three months after the meeting.

Israel, its sanctuaries, lands and temples has been luring Russian travelers since the middle of the 19th century. The Russian-Palestinian society of Alexander III was building churches, schools, convents and monasteries there. Russian songs and language can be heard during every Easter and Christmas, at religious processions and ceremonies. The long-lasting conflict between Israel and Palestine, four years of battles and terrorist acts, have caused immense damage to the tourist industry. About 50,000 Russian citizens visited Jerusalem and Bethlehem in 2000, although the number of tourists has reduced three times nowadays.

Rafi Ben-Hur, the Israeli Tourism Ministry's deputy director, said that Russia was extremely interested in Russian businessmen, tourists and Orthodox pilgrims. It was Rafi Ben-Hur, who developed the above-mentioned novelties of the visa regime. It will be very easy for a Russian person to receive an Israeli visa if a person has visited Israel at least once in two years. A Russian businessman interested in running business in Israel will be given a three-year multi-visa without any problems.

Israeli officials say that Israel may soon cancel the visa regime with Russia in the future. Russian and Israeli foreign ministers will have to do a lot of work to accomplish the goal, although the project has been given a go already. The new rules will be put into effect in about ten days.