Russian specialists designed grenade-launchers, which can target terrorists' respiratory apparatus, or blind and deafen them

Russia, one of the first states to experience terrorist attacks, currently takes leading positions in the development of defense technologies to struggle against terrorism. Russia's defense giant, RosoboronExport has recently organized an exhibition of its latest developments in Moscow. 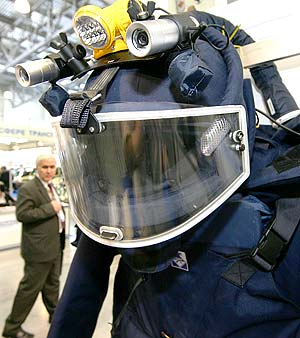 The show presented a selection of weapons and military equipment, many of which have no analogues in the world. Russia has won foreign markets in over 50 states, having extended the sales territory twice during the recent three years.

A lot of eye-catching exhibits were presented at the show. There was a unique robot, for example: the machine, which can detect bombs in a street, in a building, at the bottom of a car or inside its saloon, in a truck. The robot can neutralize a bomb too, if necessary. The invention is outfitted with a remote control system, which allows to manipulate the machine at the distance of 600 meters. The robot weighs only 40 kilos and can be packed in two suitcases.

Weapons of non-lethal effect are capable of neutralizing terrorists, instead of destroying them at a spot. Russian defense specialists designed grenade-launchers, which can target terrorists' respiratory apparatus, blind and deafen them or disable extremists with rubber grape-shots.

The exhibition exposed up-to-date means of individual protection, which Russian anti-terrorist units use in their daily activities already. The “Redut” flak jacket guarantees protection against bullets, including TT steel-headed bullets. If battling conditions are much more serious, the “Redut” flak jacket can be transformed into an enhanced version, which saves military men from automatic fire of the M-16A1 gun. “Armor” suit designed for explosion specialists secures a person against an explosion of some 1.5 kilos of TNT, even if a bomb blasts only one meter afar.

Various firearms to combat terrorists in city streets or in restricted spaces were also exhibited at the show. A machine gun for underwater battles enjoyed special attention at the show. The gun, which has no analogues in armed forces of foreign states, can destroy targets at the range of about 30 meters.