Former friends about USSR's contribution to victory in WWII

Had Hitler never attacked the USSR, the Soviet troops would have never come to rescue the occupied nations

The Potsdam Conference which defined the post-war arrangements will celebrate its 60th anniversary in mid-July. Meanwhile, the Soviet contribution to the victory is being widely discussed in both Western and Eastern Europe. What was first defined as "a relief from Nazis pressure" has lately become "Soviet occupation." Let us understand the attitude of Eastern Europe to the role of the Soviet Union in World War II. 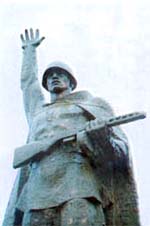 During the Soviet era Bulgaria was regarded as our closest ally. No wonder it was so – its economy as well as social regulations and political regimes were to a large extent copied upon the Soviet model. Again, the explanation of the wartime events was the following: the Soviet Union rescued the country from the Nazi and from the local aggressors. As a result, a large number of monuments, that commemorated Soviet soldiers, were erected in the country after the victory. Among the most famous is "Alyosha", situated on the central square of Plodiva, the second biggest Bulgarian city. Moreover, one of the cities to the North-East was named after marshal Tolbukhin.

However, this approach has significantly changed over the last fifteen years. Dobrich replaced Tolbukhin on the map. In the same time in Bulgarian textbooks on history the cooperation with Germany is said to be due to "no-other-way-politics", rather than to the result of "antipatriotic Nazi group actions." The streets that commemorated the Soviet militaries or anti-Nazism Bulgarian fighters were renamed, the monuments were neglected and some were even destroyed. The historians wrote that the major contribution to the victory over Nazis was due to the US and British participation, while the actions of the Soviet Army led to the establishment of the totalitarian regime.

However, the role of the USSR in the war is not totally ignored. The majority of monuments, including "Alyosha" are still on their places, while the contribution of our country is now treated with more consideration. Really, the forcible and aggressive replacement of the democracy could have never taken place, because the former one has hardly ever existed in pre-war Bulgaria. Having undertaken a quick swift to the anti-Hitler coalition, the country did not loose a meter of its land. Such favorable outcome was due only to the firm position of the Soviet Union: Bulgaria has never acted against the USSR during the war, for which was called “a willful German ally.” Although such behavior makes them feel proud, the Bulgarians prefer not to mention such shameful and tragic events as the occupation of Macedonia and further forcible “bulgarisation” of the population. In general, the role of the West in the victory is regarded as the principle one, while the country itself is depicted rather as a victim, which was forced to choose between two totalitarian regimes.

The neighboring Romania faced a different situation. The struggle for the power between several groups ended with the victory of the pro-German political party, led by general Ion Antonesku. However, Moldavia, according to the Molotov-Ribbentrop Pact lost a significant part of the land, including Bessarabia (the foundation for soviet Moldavia), Bukovina (Chernovitskyu region of Ukraine) and Izmail. After that under Hitler's demand the government passed territory on the West to Hungary and on the South – East – to Bulgaria. Moreover, Romania has become the major source of oil for the Third Reich.

In contrast with its Southern neighbors, Romania was leading purely aggressive war against the USSR. The country managed to return all land that was lost under the Molotov–Ribbentrop Pact, and also occupied Odessa and Pre Dnest territories. The Romanian army was fighting near Stalingrad, Kursk and especially in Ukraine, where the Hungarian soldiers together with the Germans were taking the decision on the “Jewish question.” When in summer 1944 the Red Army entered the country, the king Mihay had to make tremendous efforts to put down Antonesku, so that Romania would join anti-Hitler coalition and not loose all its land.

Moldavia, Bukovina and Izmail did pass to the USSR, and Bulgaria managed to save the territories it gained earlier. However, Romania returned what was granted to Hungary. So if we take into consideration the fact that Bessarabia and Izmail, the former parts of the Russian Empire, were occupied by Hungary in 1918, Romania returned nearly everything it could ever desire, including the territory, populated by the ethnic Hungarians. Nevertheless, the modern Romanians try to pretend they suffer from the Molotov-Ribbentrop Pact, but in general their attitude to the role of the Soviets in the war resembles the Bulgarian one. Because the Soviet-Romanian relationship was rather weak and tensed, there are hardly any monuments to the Soviet soldiers in the country. Although Romania was an obvious aggressor in the war, it tries to blame the USSR for everything, accusing it of imposing the Stalin's regime. In the same time, searching fro the democratic routes in the pre-war country is ridiculous.

While concluding on the role ofour country in World War II, it is necessary to mention that the attitude was strongly influenced by the past-war events, in particular, the entrance of these countries into the Soviet camp. The cost of the events outplaced the original reason – had Hitler never attacked the USSR, the Soviet troops would have never come to rescue the occupied nations. Under socialism, nobody denied their status as a nation, for the exception of the Nazi who regarded them as people of low quality only because of their nationality. In some cases we saw the intention to make our country responsible for certain mistakes and mishaps.

The width of the gap between Russia and Europe became revealed after the celebration of the 60th anniversary in Moscow, which reunited practically all leaders from the above mentioned countries. What they said in reference with this question showed how strong was their desire not to define the truth from the lie as well as their intention to be better speakers on the anti-Russian theme than their Western masters.