Russia to destroy its chemical weapons on its own

Industry and Energy Minister Viktor Khristenko submitted to the government a draft of the target program Destruction of chemical weapons arsenal in the Russian Federation. According to Mr. Khristenko, the program is already in effect yet procedures and a financial package pertaining to the project should be specified. The above draft is a third version of the document produced over the last few years. The latest version calls for a higher utilization pace of the Russian chemical weapons. The document says that Russia should reprocess 40 thousand tons of combat poisonous materials. In the past the bureaucrats planned to finance the project with foreign funds. But Moscow never got the money. Now the government has to allocate funds from the budget. On the whole, the government approved the proposals providing allocation of 171 billion rubles for the program implementation. 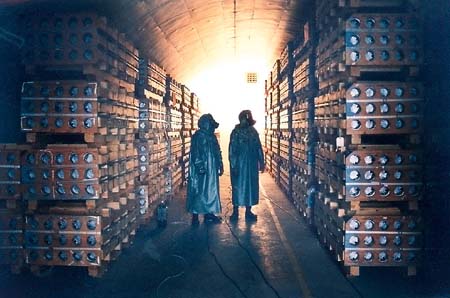 Russia signed the International Convention banning chemical weapons back in 1993. However, it was not ratified by Russia until 1997. The actual operations began five years later in one of  seven storage facilities available at the time. The facility was located in the village Gorny of the Saratov region. In 2002, during the G-8 summit in Canada, the West promised to allocate $20 billion over the period of 10 years to step up the process. However, Russia never got the money in full due to the main sponsor i.e. Washington. The U.S. demanded that Russia meet additional requirements to finalize the deal. Russia was supposed to grant access to U.S. inspectors to Russian chemical plants outside the framework of the Convention, Americans also wanted to visit Russian nuclear weapons storage facilities and so on. The Kremlin refused to accept the requirements and the U.S. funds were never sent to Russia as a result. Holland and Germany are the only countries investing money in Russia's chemical disarmament without imposing any additional requirements.

“Russia received 21 billion rubles in lieu of 35 billion rubles from the foreign states for the implementation of the program,” said Mr. Khristenko on Thursday. He said that cooperation between Russia and foreign states had involved only three utilization facilities out of seven available. He pointed out that the U.S. had not allocated any money for the program from 1999 through 2002.

Meanwhile, Moscow found itself in a pretty difficult situation. The U.S. promised to help Russia build a plant for reprocessing chemical weapons in the village Shchutchie of the Kurgan region. The facility is regarded as having crucial importance to Russia's chemical disarmament program. A storage facility located in the village has more than 5 thousand tons of sarin (nerve gas), soman, and VX gas packed inside the land mines, artillery shells, and missile warheads. From the technological point of view, it is the largest and the most complex project enabling Moscow's fulfillment of its conventional commitments. The commissioning of the plant was scheduled for 2005. Now Russia has to foot the bill due to the lack of U.S. funds.

“Destroying our stockpile of chemical weapons of a 3rd category i.e. gunpowder detonators and artillery shells was our biggest mistake,” said Vladimir Lyashchenko, assistant to the industry and energy minister for defense complex issues. Mr. Lyashchenko said the gunpowder detonators and artillery shells were the “packaging” material used for conveying poisonous stuff to potential targets in Europe and America. “Once we destroyed them, the world figured out Russia was not a threat anymore,” added Mr. Lyashchenko.

As a result, Russia admitted four years ago that it could meet the deadline and therefore was unable to start its utilization program by 2007. Russia requested to postpone the start of operations up to 2010. But the members of the Convention are entitled to use its postponement rights only one time. Aside from causing worldwide political repercussions, the failure to meet the deadline may result in economic sanctions for Russia e.g. embargo on the export of chemical fertilizers. Russia's annual earnings from its fertilizer exports are in the neighborhood of funds spent on the Russian chemical disarmament.

The old version of the program provided for the construction of facilities for chemical weapons utilization in seven locations: Gorny (Saratov region); Kambarka and Kizner (both located in Udmurtia); Maradykovsky (Kirovskaya region); Leonidovka (Penza region); Pochep (Bryansk region); Shchyuchie (Kurgan region). However, the implementation of the program was disrupted due to lack of funds (only 25 billions rubles spent from 1995 to 2004).

“These days we have sufficient financial resources to resolve the problem independently,” said Mr. Lyashchenko. He said $600 million could be allocated for the program this year as opposed to $200 million allocated in 2000. According to head of the Federal Industry Agency Viktor Kholstov, the financing will enable Moscow to complete the destruction of yperite (mustard gas) and luisite stored in the village of Gorny. A plant will be put into operation in the village of Kambarka in Udmurtia until the end of this year. Another one will be commissioned early next year in the village of Maradykovsky. The plant in the village of Shchuchie is slated to enter service in 2008.

The program stipulates that 10% of the funds should be spent on the development of social infrastructure of the regions hosting the utilization facilities. “Additional 7.5 thousand jobs should be created, residents' social conditions should be improved, 25 houses and a number of schools and other facilities should be built in the course of realization of the program,” said the minister. The government adopted the draft program. According to Vice Prime Minister Alexander Zhukov, the draft program will be polished off until August 15th and resubmitted for consideration to the State Duma.