Russia's Foreign Affairs Minister: The Priority is Dialogue among Civilizations

We reproduce extracts from the meeting with Sergei Lavrov, the Foreign Affairs Minister of the Russian Federation, with journalists in Moscow on December 20th, reporting on the diplomatic year 2006, when Russia chaired the G8, the Black Sea Economic Cooperation Organization, the Arctic Council and the Committee of Ministers of the Council of Europe. 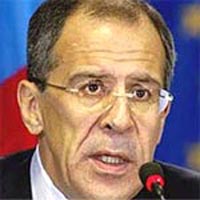 Russia's Foreign Affairs Minister: The Priority is Dialogue among Civilizations

Regarding the role of Russia in international affairs, Sergei Lavrov stated that “We are pleased that the situation in Russia and its actions in international affairs attract the growing attention of journalists and political scientists both in our country and abroad,” adding that “Naturally, we do not impose and will not impose on anyone our views of any developments relating to Russia and our foreign policy. Honestly, we are not going to get involved in information wars either, although occasionally we are provoked, nor will we resort to ‘megaphone rhetoric,’ but of course, we will continue to try to meet the legitimate demand for objective information about Russia and our foreign policy”.

For the Russian Foreign Affairs Minister, this year was “not easy” however it is clear that “the role of the Russian factor in international affairs has considerably grown”. This is due to the strengthening of institutions at home and the fact that Russia managed to define world development accurately, understanding that international relations must be based on a collective approach, a position “supported, unfortunately, among other things by the sorry experience of unilateral force-based response at the cost of countless victims”.

Sergei Lavrov stressed that importance Russia’s work this year, identifying the priority as being “the promotion of a dialogue between civilizations,” this being the fundamental precept of Moscow’s approach in chairing the Committee of Ministers of the Council of Europe (aimed at a Europe without dividing lines, raising the authority of the Council, promoting democracy and civil society) and the Arctic Council (environmental sustainable development of the region).

“The key outcome of our joint work with the G8 partners was the achievement of the verified balance of interests” regarding energy security, defining mutual responsibilities among suppliers, consumers and transit agents. The joint effort in the fight against nuclear terrorism also came out of St. Petersburg strengthened. Other main issues under discussion were education and the fight against infectious diseases.

The main area of activity regarding the Commonwealth of Independent States (ex-USSR minus the three Baltic States) was a continuation of reform, amied at adaptation to new realities. The tangible results were translated in the setting up of a council and fund for humanitarian activities in these 12 states.

While Russia is globally satisfied with its relations with Ukraine and normalization of relations with Moldova is under way, for Moscow, “we cannot see any realistic approaches of the part of Tblisi (Georgia) to relations with Russia” yet perhaps the problem resides more in a question of mentality and approach.

This year, the first informal meeting between the Russian President and the leaders of all 25 European Union countries took place at the Helsinki Summit. On the agenda is the preparation of a new Partnership and Cooperation Agreement. Russia is now ready and waiting for the European Commission to provide a mandate for negotiation.

“We have an interest in a stronger European Union,” which speaks with one voice, stated the Russian Foreign Affairs Minister.

2006 was the Year of Russia in the PR China in which over 300 “meaningful events” were held. 2007 will be the Year of China in Russia. 2006 was also the year in which the first Russia, China, India (RCI) Summit and Brazil, Russia, India, China (BRIC) meeting were held.

“We have managed to give a new impetus to our interaction with Latin American countries,” described by Sergei Lavrov as “a promising region”. The Russian Foreign Affairs Minister highlighted the setting up of a political dialogue mechanism between Moscow and MERCOSUR and the reality of widening trading and economic relationships has been catered for.

“I view very positively our relations with Latin American countries. With many particular countries in the region, including Cuba, we have independent mechanisms for the development of political dialogue” which have recently been implemented together with integration associations, stated Sergei Lavrov, who added that “I can see big prospects” in the development of mutual interests between Russia and Latin America.

“Russia has always been active in the efforts to achieve a settlement” in the Middle East whichprovides a comprehensive agreement for Arab and Israeli interests. This is what Moscow does as a member of the Quartet. For Sergei Lavrov, any agreement must pass by hearing Syria and Lebanon, in which country the current situation causes “serious concern”. Regarding the balance between Damascus and Lebanon, Russia supports the efforts of the League of Arab States.

The work of the EU troika, Russia, the USA and China was highlighted by Sergei Lavrov, who pointed out that last January President Putin offered to set up treatment centres of nuclear material in Russia, so that countries like Iran could pursue peaceful nuclear energy programmes while posing no potential risk to the international community through development of weapons-grade material. For Russia, “we need to try to resolve all issues related to Iran’s nuclear program through negotiations and diplomatic efforts”.

Looking to the future

For Sergei Lavrov, although 15 years have passed since the end of the Cold War, stereotypes remain and it is necessary for a collective good will to enable us to move on. The international community should see “a strong Russia that has regained confidence not as a challenge, but as a chance to develop large-scale and mutually beneficial international cooperation”.

“We realise that there are those who are surprised, perhaps even unpleasantly surprised, to see the rapid revival of Russia, restoration of its abilities as one of the leading countries,” however “we are open to cooperation with everyone,” stated Sergei Lavrov, who pointed out that “Russia will only cooperate of the basis of equality, mutual account of interests and mutual benefit”. For this reason, Russia is formly opposed to “any re-militarization” or change of ideals in the current balance in the international community.

For Moscow, future international relations must be based upon “a multilateral rule-of-law basis with more involvement from civil society, NGOs, the media, the academics and the corporate sector.