The climate change phenomenon is obvious, although modern science does not have a definite explanation to it yet

The G8 summit is set to take place in Europe this week. The global climate change on the whole and the Kyoto Protocol in particular, are expected to become one of the central subjects of the international discussion. US President George W. Bush used the occasion to crack down on the ideologists of Kyoto agreements. Russian scientists prepare their own scandal too: they want Russia to withdraw its signature from the British report on the global warming. 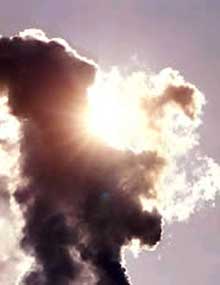 Russia approved the Kyoto Protocol in September of 2004, whereas the administration of the US president is rigidly determined not to participate in such a doubtful venture. George W. Bush stated on the threshold of the G8 summit that the US administration viewed the Kyoto Protocol as a form of international fraud. Bush strongly excluded an opportunity for the USA to ratify a treaty, the essence of which would be similar to the Kyoto climate change treaty. The US economy would be ruined, if the USA met the conditions of the climate change document, Bush clarified. It is worth mentioning that the USA joined the protocol in 1997, although it later pulled out from the treaty four years later, when American experts analyzed all advantages and disadvantages of the decision.

According to the standpoint of the US administration, one should not restrict the economic development and assign huge funds for the struggle with carbonic gas in poor states. One should deal with such problems independently, investing in energy-saving and ecologically pure technologies, Bush believes.

It is hard to accuse the USA of greediness and unwillingness to acknowledge ecological problems. The Bush's administration launches new projects of nuclear and alternative energy, to gradually reduce the share of hydrocarbon-powered thermal power stations in the future. Pragmatic Americans kill two birds with one stone: they reduce the amount of harmful emissions in the atmosphere and strengthen their energy security from politically unstable fuel exporters.

One has to acknowledge the fact that the USA does not need any external pressure at this point: whether it comes from the Kyoto Protocol or another similar agreement. The dynamically growing India and China do not need it either.

Russia apparently needs the protocol despite its ambition to double the GDP. The treaty stipulates Russia and former republics of the Soviet Union should cut the emission of greenhouse gases by over 30 percent during the forthcoming years and by 90 percent by 2050. It means that the economic activity on the territory of the Russian Federation is supposed to drop by 70-80 percent, whereas the GDP growth for Russia and former Soviet states must reduce two or three times by 2050. To crown it all, global warming restraining programs are evaluated at up to 47 trillion dollars.

Russia already suffers losses from the ratification of the climate change treaty. The idea, which permeates through the Kyoto Protocol, is connected with the myth of the global warming. However, Russia's congresses, addresses and most prominent scientists were trying to prove to the world that the actual reasons of the global climate change were still unknown. Russian specialists repeatedly said that the problem needed to be developed and studied further. It is noteworthy that Russian scientists were not allowed to participate in international discussions on the matter. They are not going to give up fighting, though: a delegation of Russia specialists reportedly prepares a scandal for the G8 summit.

Russian scientists disliked the fact that the British report about the global response to the climate change issue (the report will be presented at the G8 summit in Scotland) was signed by the president of the Russian Academy of Sciences, Yury Osipov (in addition to eleven signatures made by foreign academicians).

The chairman of the climate change and Kyoto Protocol council of the Russian Academy of Sciences, Yury Israel, said that the collective discussion of the document prepared by British specialists started only yesterday. As a result, members of the council asked Yury Osipov to withdraw his signature from the report. “Russian academicians have not changed their stance regarding the Kyoto Protocol,” Israel said at yesterday's press conference.

Russian scientists still consider the Kyoto Protocol scientifically ungrounded and inefficient in terms of achieving the goal of the UN Framework Convention on Climate Change. In addition, specialists are certain that the Kyoto Protocol is harmful to the Russian economy.

It is an open secret that the ice of the Antarctic acts as an indicator of the global climate change. Kyoto Protocol champions persistently emphasize the threat of the Antarctic thawing. A group of Russian scientists, who have recently returned from their mission to Antarctica, presented a sensational report to the Academy of Sciences. Having conducted a series of meticulous experiments on board the Krasin ice breaker, the scientists concluded that the biggest part of the Antarctic continent had become colder with time. Yury Israel said that the recent mission could only prove that there were too many uncertainties left in climate change forecasts. The phenomenon itself is obvious, although modern science does not have a definite explanation to it yet. Trillions of dollars seem to be a huge sacrifice at this point: the USA, China and India are aware of it.