Strategy for economical development, directed at liberating the nation from petroleum dependency, improvements in the social sphere, which are applied with the help of national projects, bringing the immigration law in order and the role Russia plays in global relations became the highlights of the traditional annual “hot line” which President Vladimir Putin held with the nation’s residents on Wednesday. 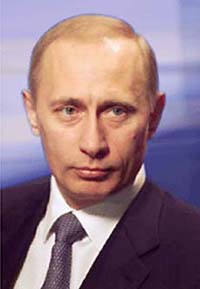 The dialog lasted approximately three hours on live TV and revealed that the issues that most worry the citizens of Russia have to do with their economical and social wellbeing. Meanwhile the issues on internal politics took a very small place in this year’s dialog. However it was precisely this part in which President Putin addressed the topic on everyone’s mind: speaking of his own career plans the head of the nation made it clear that he had every intention of staying in the political arena and contributing to the nation’s future after a new president is elected in 2008.

While the president was preparing for the “hot line” interaction with his fellow Russian citizens more than 2 million questions were sent in, which became a new record in the history of this type of communication between the nation and its ruler, which was first initiated in 2000. Last year, for instance, the number of requests reached one million. It took the president nearly three hours to answer the selected questions.

Despite the fact that only 53 answered questions of the 2 million requested appear to be so few, Vladimir Putin managed to brush over most of the relevant issues during his discussion, thereby answering many more questions in the process. As in the years before, the Russian citizens were mostly concerned about the socio-economical situation. And the president also appears to count the economy one of his top priorities.

During the answering of the first question two discussion leaders Sergey Brilev and Ekaterina Andreeva asked the nation’s leader to provide his own evaluation of the current situation in the country. Vladimir Putin responded right away saying that each country’s successes and failures are defined by its economy and added that in case of Russia he was satisfied with the way the things were looking.

Speaking of the foreign policy Putin mentioned that focus continues to be primarily oriented towards developing relations with the former Soviet republics. Having admitted that the new Union was created as a means for a “civilized” divorce he nonetheless expressed hope for a development of an economical integration process in the post-soviet space.

Having specifically highlighted that Russia has no imperial ambitions, Putin repeated several times that the worsening of the Russian-Georgian relations was the product of Georgia ’s government’s attempts to solve the conflict in South Osetia and Abhazia through the means of military involvement.

The National Question, the president’s personal sentiments about inter-ethnical tensions and the instances of discrimination against Georgians caused a highly accented reaction Vladimir Putin. Answeringthe question from Kondopoga, where two prestigious TV studios were working, Putin said that he considers the events in that Karelian city a signal from the “hurting spots” of Russia . “When people die it is always a tragedy. Life of any human being is priceless,” the president added.

As for eth internal policy Putin’s most outstanding response had to do with his own plans after the year 2008. The president reminded his listeners that in accordance with the Russian Constitution he was not intending to stay for another term despite the fact that he really enjoyed his job. This position of the nation’s leader is familiar – he often spoke in similar ways in his public announcements.

However what he was intending to do once he left the Kremlin the president never addressed except for one single phrase a year ago referring to the fact that he “will find his place in the ranks.” Now Vladimir Putin opened up a lot more about his plans. He expressed the hope that after surrendering the privileges of presidency without manipulating the law according to his own interests he would manage to “keep the thing most precious to any politician – the trust of his people.”

That way the president let everyone know that he was not going to leave the political arena. Referring to the Russian citizens Putin said “together we will be able to influence the further development of our nation.” He added that “we will not be able to do that without developing our political system based on the democratic principles first and foremost.”

After the “hot live” was over Vladimir Putin addressed the question of the next presidential candidate in his response to the journalists. Having said that he was not yet ready to provide a name he added that he is only sure that the person would be over 35 years old, resident of Russia the amount of years required by the law. “As a citizen of Russia I retain the right to vote in the elections. And I don’t think that I should limit this right by not expressing my preferences to the media. When the time comes I will tell who it is,” Putin said.

It would be worth to mention here one other expression of the president, which he made one year ago. He mentioned then that he saw his personal task as “creating the conditions for national development in the long run in order that the power could be handed over to the young educated and effective leaders.”

It may be suggested that in the next year’s “hot line” which would be the last for President Putin unless something changes, more time would be allocated to the topic of political struggle, especially if one is to consider the fact that the election campaign would be at its height.

In telling the journalists about his own experience with the “hot line” the president said that he was very satisfied with the way the dialog went. “My general impression – we talked business this time,” Putin said, “The people were business-minded. The alarmist questions, as official call them, were minimal, which implies that none of the spheres are in unfortunate condition.”