Events may take an unexpected turn regarding Russia’s possible membership in the World Trade Organization. It may seem at first sight that things are developing steadily and normally as they did before: another stage of negotiations started in Washington on Monday. The head of the Department for Trade Talks of the Ministry for Economic Development, Maxim Medvedkov, chairs the Russian delegation at the talks. Medvedkov communicates with US representatives Dorothy Dwoskin and Susan Schwab. 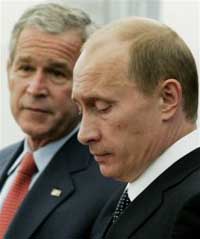 Both Russian and US officials have been making quite positive remarks on the matter recently. A senior official of the Russian government, Alexander Zhukov, believes that the talks with the US delegation pertaining of Russia's WTO membership may end already in October. Zhukov added that there was one moot question left: the shipments of US-made meat and poultry products to Russia. Gary Litman, vice president for Europe at the US Chamber of Commerce said that Russia and the USA were about to come to an agreement in the talks either at the end of October or in the beginning of November.

However, it turns out that things are not so optimistic as they seem to be. The current round of WTO membership talks between Russia and the USA may become the last. Russia may announce its decision to withdraw from the process of becoming a WTO member already in a week, a source from the administration of the Russian president said. The source said that President Putin supposedly told US Secretary of State Condoleezza Rice during her visit to Moscow on October 21 that Russia may suspend the WTO incorporation process if there is no progress achieved in the adequate talks with the USA.

One has to admit that Washington does not rush to make any significant achievements at this point. Russia and the USA still argue over the imports of agricultural products to Russia and intellectual property guarantees.

Russia continues to insist on its own conditions of joining the World Trade Organization. However, foreign experts say that Russia does not show interest in the question on the whole because the Russian delegation in the talks is not numerous at all. They particularly refer to China that sent about 3,000 officials to promote China’s interests in the WTO.

Georgia, a republic of the former USSR, apparently decided to join the USA to protest Russia’s membership in the WTO. The Georgian authorities are thus trying to put pressure on the Russian administration after the latter imposed sanctions against Georgia in the beginning of October. To crown it all, Russia needs to complete bilateral negotiations with Costa Rica and Moldavia. Russia is solving the questions of duties on sugar with Costa Rica, whereas Moldavia demands Russia should lift the ban on Moldavian wines.

Become a member of Pravda.ru Forum where freedom of speech has no limits