President Vladimir Putin started his 5th TV conference in Moscow at midday today. The president was answering questions from citizens of the Russian Federation for 2 hours and 54 minutes. Putin managed to answer more than 50 questions during the conference. The conference center has received over two million questions from people in total. Putin had a similar communication with the people of Russia in September of 2005. 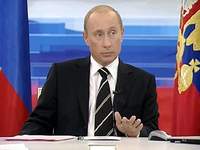 President Vladimir Putin reaffirmed Wednesday that he would not try to run again for the presidency, but said he would retain influence over Russia even after leaving office in 2008 as required by the constitution.

Speaking during a nationally televised question-and-answer session, the Russian leader also vowed that the perpetrators of the recent high-profile killings of a top Central Bank regulator and well-known investigative journalist would be brought to justice. And he hailed the oil-rich country's newfound financial muscle that has sent the economy growing at an impressive rate of about 7 percent, the AP reports.

"In all, I can say we are satisfied with how the country is developing, including the economy," he said.

During the broadcast, the Russian leader reeled off statistics, chided North Korea, pledged to protect agriculture producers and vowed that his government would strictly monitor all companies, including foreign ones, for environmental violations. With his popularity among Russians extremely high, Putin sees the session as an opportunity to show he can respond directly to voters' concerns.

Dressed in a dark blue suit and striped tie and seated at a rectangular table, the Russian president gestured and pointed as he fielded questions, as if giving a lecture. It was his fifth such appearance since coming to office in 2000.

The immensely popular Putin is constitutionally barred from running for a third consecutive term, but supporters and various regional groups, including in Chechnya, have called for a referendum on amending the country's laws to allow him to stay in power.

"Even having lost the powers and the levers of presidential power and not tailoring the basic law according to my personal interests, I will manage to retain the most important thing that a person involved in politics must cherish - your trust," he said. "And using that, you and I will be able to exert influence on the life of our country and guarantee its development."

"Despite the fact that I like my job, the constitution doesn't allow me to run a third time in a row," Putin told a questioner.

The recent killings of top Central Bank regulator Andrei Kozlov and investigative journalist Anna Politkovskaya (articles) raised new fears that Russia was returning to the violence of the 1990s, when business disputes were commonly solved through gangland style shootings and bombings.

Putin said contract killings had declined in recent years and asserted that authorities were becoming more successful in cracking down on financial crimes.

"The obligation ofthe state is to bring any such investigation to the end - this concerns the killings of mass media representatives and killings in the economic sphere," Putin said.

Wednesday's program featured correspondents from the state-run television network relaying questions from small crowds in certain cities around the vast country, as well as people phoning in or sending e-mails and text messages.

It was impossible to tell whether the questions were arranged in advance or questioners coached, but during past question-and-answer sessions, critics alleged that authorities and state television reporters selected audiences allowed to go live with Putin and screened questions.

Putin said Russia's economic growth would reach 6.6 percent this year, noting the government had paid off its Soviet-era debts ahead of time and he said real income had grown about 11 percent this year.

On North Korea, Putin said Pyongyang's Oct. 9 nuclear test was "inadmissible," adding that "the way out of the current situation is to return to six-party talks." He also said that pressuring North Korea was counterproductive, and that such an approach could lead the situation into an impasse.

Amid worsening ties with Georgia that has seen Moscow cut off air and land transport routes to the ex-Soviet republic (articles), Putin told one questioner that Russia was not seeking to incorporate two Georgian separatist regions where most citizens have been granted Russian citizenship. Georgia has accused Russia of encouraging the separatists.

He also reiterated that while Russia recognized country's territorial integrity, it also recognized a people's right for self-determination.

"We will be closely watching international precedents, including in Kosovo," Putin said. Russian officials have warned the West that independence for Kosovo - currently under discussion in U.N.-mediated talks - would lend legitimacy to the Georgian regions' sovereignty claims.

Others questioners complained about middlemen squeezing out small farmers and sexual harassment in the workplace or asked about the explosion in gambling nationwide or alcohol prices going up.