Russian and foreign press comments on the recent meeting between Russian President Vladimir Putin and Israeli Prime Minister Ehud Olmert. The official meeting between the two leaders started with Putin’s request to say hello to Israeli President Moshe Katsav. Those words became the most unexpected moment of the entire meeting, The Jerusalem Post wrote. 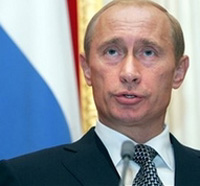 “Say hello to your president. What a strong man! He raped ten women! I never expected that from him! We all envy him,” NEWSru Israel quoted Putin as saying. Mr. Olmert was obviously confused with those remarks. Ehud Olmert said that it is not the right time to envy the Israeli president, who will most likely have to face the trial on rape and sexual abuse charges.

This is exactly the case when one cannot believe the words that he or she hears. Putin definitely wanted to give some moral support to Olmert, who found himself in a difficult situation owing to the efforts taken by President Moshe Katsav. Apparently, Putin wanted to support Katsav himself, but he was absent from the talks. What was he doing?

A spokesman for the Israeli government, Israel Maimon, stated Thursday in a radio interview that the Russian president did not make the members of the Israeli delegation laugh with those remarks. “I do hope that everyone will remember other episodes of the meeting, but not those remarks from Putin,” the official said.

When the meeting was over, Ehud Olmert decided to say something back to the scathing Russian president. The Israeli PM referred to the recent football match between Russia and Israel, which ended with a draw 1:1. “Mr. President, I want you to know that we in Israel are very glad that Russia did not show its predominance over Israel at least in football,” Olmert said. It is worthy of note that politicians often used sports humor in their biting remarks with one another. When Mr. Olmert finished his sentence about football, he and many of the people present looked at Vladimir Putin expecting to see his reaction. The latter was standing nearby as motionless as a statue. It seemed that his assistants had not translated Ehud Olmert’s words or made a mistake in the translation and represented it as something serious.

Unlike Berlusconi or Blair, Putin is a unique politician who can stay as cold as ice and ignore peppery words. Does Putin like football after all?

Putin and Olmert displayed their utterly different styles of behaviour during the talks in the Kremlin. Olmert represented himself as a sociable, polite and bubbly person. Putin is a cold-blooded and emotionally constrained man. Olmert is one of the “good guys” who can friendly pat his colleagues on the back, whereas Putin is a secluded former KGB agent.

Putin was standing still near Ehud Olmert for ten minutes, when the Israeli PM was delivering a speech at the end of the official meeting. Putin did not move a facial muscle, he never nodded, smiled or looked at Olmert when the prime minister tried to joke. Putin was apparently trying to act as a confirmation to all stereotypes about the bosses of espionage. He showed no reaction even when Olmert started flattering him. Ehud Olmert is fond of flattering world leaders during official meetings, whether it is Egyptian President Hosni Mubarak, US President Bush, or French President Jacques Chirac.