After a series of special measures aimed to deport illegal Georgian emigrants from Russia, to close big casinos and restaurants supposedly controlled by the Georgian mafia and to cleanse “ethnically polluted” markets, Russian special services are taking a step further. Law-enforcement organizations started dealing with banks that supposedly laundered money in Russia to fund the unfriendly regime of Georgian President Mikhail Saakashvili. 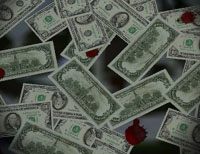 Inspectors withdrew documents from the office of Commerce Bank VEK-Bank today. The license was withdrawn from the bank in 2005. Investigators said that the bank used a network of other illicit financial organizations to transfer criminal money to Georgia and other foreign countries. Bankers of the Georgian mafia have thus managed to legalize and export over seven billion dollars since 2004. The funds could have been used to support the Georgian military men who waged war in the unrecognized republic of Abkhazia. The mafia mob nicknamed as Juba said that he was funding a “small victorious war” in Georgia .

Officers of Russia ’s financial intelligence detained a criminal group of bankers, who managed to cash huge sums of money through Moscow-based banks and illicit non-commercial organizations. Juba’s income from those operations made up over $500,000 a day. From April 2004 to January 2005 the bankers laundered over 200 billion rubles, 391 million US dollars and 66 million euros. The lion’s share of the money was transferred abroad.

Police officers of the Russian Ministry for Internal Affairs had to cooperate with special agents from Germany , Austria , Latvia , Lithuania, Israel and Switzerland to detect numerous bank accounts and firms which the swindlers used abroad.

The above-mentioned Georgian mob, Juba , is a native of Tbilisi , the capital of Georgia . The criminal group that he chairs deals with illegal financial operations to launder, cash and transfer the currency assets from Russia to Georgia , Latvia and the USA. Juba established control over eight banks in Moscow. All the banks involved in the criminal scheme have been deprived of their licenses already.

Juba holds a fake passport and stays in Russia illegally. In the beginning of October he departed to France to acquire real estate.

Juba holds a fake passport and stays in Russia illegally. In the beginning of October he departed to France to acquire real estate.