The wife of Russia’s richest man Roman Abramovich is preparing a divorce party for her husband’s 40th birthday next week. Daily Mail reports that Irina, the mother of five children, could theoretically receive as much as half of her husband’s 18 billion fortune. 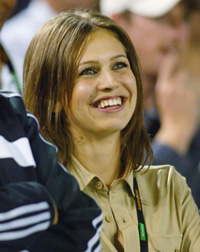 Irina has been meeting with the famous lawyer Raymond Tooth who is nicknamed “Jaws” for his success in the business of divorce. Tooth is likely to be one of the guests invited to the upcoming birthday party.

Abramovich’s affair with Daria Zhukova appears to be the main reason for the divorce. Their relationship became public last week after the official confirmation from Abramovich’s representative John Mann. The 23-year-old woman works as a model in a popular magazine. She was dating a Russian tennis star Marat Safin prior to meeting Abramovich in Febuary of 2006.

According to the Evening Standard report, Abramovich follows Zhukova around the world meeting her in various settings and taking her to the soccer matches of his team. Rumors about their affair have been circulating since the spring.

One of the sources close to Irina’s unfaithful husband said that, “The marriage of Abramoviches has been going through a very difficult phase. They tried to keep the issue secret but many people found out anyway."

"Now they live separately," the source added, "Irina has suffered before because of Roman's obsession with soccer and with business. And now she had to share him with another woman.”

One of Abramovich’s close friends made a comment concerning his new lover, “As a model Daria is breathtaking. Any man could boast of such an acquaintance. She is full of charm and sexual attraction.”