The threat of orange revolutions is irrelevant to Russia

Experts at a round-table discussion in Moscow believe that the concept of “orange revolution” became one of the top novelties of 2004. The discussion focused on potential “instability factors” regarding Russian politics in the next few years. Various points of view were expressed with regard to such a revolution, shapes it could take in Russia and prerequisites for its implementation. Experts and politicians alike agreed that the Ukrainian scenario was highly unlikely to materialize in Russia. The panelists of the Moscow round-table discussion mostly tried to agree on terminology and find out what the “orange revolution” stands for. 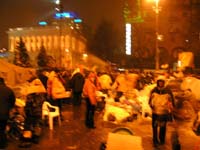 Many panelists said that a “color revolution” similar to the revolutions in Ukraine and Georgia is impossible in Russia due to the lack of a charismatic leader capable of consolidating uncoordinated opposition. Josef Diskin, co-chairman of the Council for National Strategy, pointed out another missing ingredient i.e. ideology to unite those (mostly the youth) who are unhappy about the authorities just like it happened in Kiev and Tbilisi. “The youth do not feel enough moral disgust for the authorities, they do not have an emotional drive,” said Mr. Diskin. According to him, the “orange revolution” in Russia is just a political “scarecrow.” He said the scarecrows had been placed at every corner in Russia “to remind Mr. Putin of the threat as he sees the orange light in every window.” The scarecrows were allegedly invented by certain members of the president's team who are trying to persuade the president to appoint their protege as his successor. Mr. Diskin warned that those who were behind the scheme “should not overdo it”, a virtual threat should not turn into a real threat.

According to the head of the analytical agency Merkator Dmitry Oreshkin, the “orange revolution” poses just a virtual threat to Russia. He believes the velvet revolution specter allegedly wandering about Russia has to do with a political technology being in the works for election campaigns to be held in 2007 and 2008. Mr. Oreshkin believes certain political forces intend to influence Russian voters by spreading terrifying stories about the “orange threat” instigated by the West. Mr. Oreshkin believes the method can hardly work because of a huge amount of indifference shown by the Russian people toward any “revolutionary” events or spooky stories made up by spin doctors.

In sum, the majority of experts agree that the Ukrainian or Georgian scenarios are out of the question for the Russian political situation in the foreseeable future.