President Putin is a person of tremendous interest. He has spent six years in the political arena, and for all those years his every step and his every word were discussed with utter excitement. 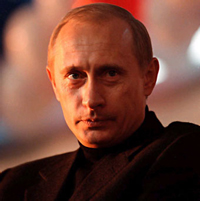 What is it about him that attracts attention? Why does the nation love him so despite the unpopular decisions he occasionally makes? Why do women consider him a sex-symbol while men try to imitate him?

The secret of Vladimir Putin’s attraction can be solved by applying physiognomics.

Take a look at these ears. They are definitely not cold! Ears’ warmness suggests excellent health. And no one doubts this fact – no one could fly a fighter plane while in bad shape!

The ears’ location right above the eye line assumes high intellect. The earlobe’s size implies long life, and the inner circle of the ear shows self-control. It appears that Vladimir Putin has not yet shown one of his latent gifts – thin ears are a sign of musical giftedness. However…. He is directing the entire country!

Sarcastic grin settles on thin lips. Such lips suggest coldness and at times even treachery, indifference to the means by which higher goals are to be achieved.

But when the president forgets that he is in the center of attention his mouth radically changes. Lips become beautiful, expressive, quite full and shapely. This shows his character’s stability as well as softness and kindness. Apparently the president hides the latter two qualities from his political opponents by pressing his lips. Let them think that he is capable of anything!

“Nose grew for the two but settled for just one,” proclaims a traditional folk saying. It is believed that the nose points out some details which are not obvious to the public. The people may judge for themselves, but as for physiognomics, the science reports that the large knows is an indication of high ambitions. When paired with blue eyes, they mean grasping the unreachable goals.

Perhaps it is a good quality for a leader. The higher the goal one sets, the more one can achieve.

Large nostrils imply that their owner is unyielding. For a government official this is a great trait: Putin would have never sold Alaska. The person’s aristocratic roots which tend to attract women can be seen in the extended bridge of the nose.

“That’s a head!” – is said of the people who evoke much respect with their intellect. An intelligent head cannot be small in size. “Those with large heads are sensitive,” once noted Aristotle. So, sensitivity is not an unknown term for our president. And it is true, since we often observe a range of emotions during official events: Putin gets irritated and nervous even though he always maintains self-control. This personality trait cannot leave the weaker half of humanity indifferent,andit maybe that the nation’s leader owes his presidential victories to female voters.

Those with a habit of slightly tilting their head tend to be attentive and sarcastic. It might also mean that the owner can pretend really well.

Putin cannot do much boasting when it comes to his hair, but the blond color of his hair speaks of depth, justice, faithfulness and good health. The head’s shape – widening at the top - means commitment to an idea.

Putin the scout has something that he ordinarily shouldn’t have – a birthmark under his left eye.

The Chinese believe that it is a mark of fate. Its location indicates a major life-changing event half-way through one’s life. It was during this age period that Vladimir Putin suddenly appeared in the political playground.

Looking at his birthmark evokes the impression that’s its carrier has very talented, and not in one are only. People with such marks can reach unbelievable heights in multiple spheres. They are also gifted when it comes to communication.

In Russia ’s history the most well-known owner of a birthmark of this kind was Peter I. Czar did everything himself because he wanted to personally try things out. Vladimir Vladimirovich also does things on his own - flying the airplanes, leading the ships, guiding the tanks…

Intriguing sparkle in the eyes, their slight squint – that’s what attracts everyone’s attention. Eyes are the windows of one’s soul. They reflect one’s flexible and somewhat sneaky mind. Ivan the Terrible squinted in a similar way.

The eye color gives away that the owner is a man of harsh unbendable determination plus another indicator of high intellect. Little wrinkles around the eye edges once again show the president’s perceptiveness.

The proportions between the size of the iris and the size of white part are a direct sign of both passion and compassion. Perhaps these are the qualities that the nation so loves about its leader.

“To come head-on” would mean to face a direct conflict, and open battle. And Putin will come out a victor every time. His oval-shaped average-size forehead speaks of courage and wisdom. The wrincles signify strictness and graciousness. The semi-circles that come out over the brows are indicators of an observant curious spirit. Usually they also mean giftedness. But the forehead wrinkles give away what the president might wish to hide: he has a tendency towards spontaneous decisions.

Two lines are mainly marked on Putin’s forehead – Mars and Jupiter. They are characteristic of jurors, judges, warriors and doctors. Such people are not afraid of blood: warriors – in battles and doctors – in surgeries.