President Putin’s recent visit to South Africa is a new page in the history of Russia. Vladimir Putin was the first Russian leader to pay a visit to a sub-Saharan African country when he arrived in Cape Town on Tuesday. Aside from making certain arrangements in terms of bilateral economic cooperation during his visit to South Africa, President Putin took the opportunity to reiterate his government’s general strategy aimed at economization of Russian foreign policy. Unlike his predecessors, Vladimir Putin had a good reason for making such a long trip. His visit to Republic of South Africa was designed to result in new contracts and agreements for Russian companies i.e. new profits for the Russian economy as a whole. Things were different in the past. The story about the Russian Emperor Peter I who reportedly planned to seize Madagascar with the help of pirates looks very much like a tall tale. The prospects for receiving strategic support or military aid from the faraway African countries were next to nil, and therefore the Russian czars showed little interest in African affairs, by and large. 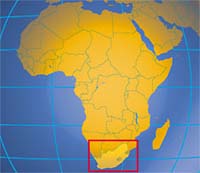 The Soviet Union managed to strengthen its position in Africa via communist ideology, which, by definition, was hugely popular with millions of impoverished residents of the African continent. However, the ideological reasons were not good enough for the ageing Soviet leaders to go on a southbound long-distance visit in the late 1970s and early 1980s.

However, South Africa had always been a place of special interest for Moscow. Numerous fighters against apartheid (including senior members of South Africa’s current government) who came to power in the last decade of the 20th century, were sent to the USSR for military and ideological training. The Soviet Union was the first country to actively support the struggle of black South Africans against white rule.

At a press conference after the talks with President Thabo Mbeki of South Africa, Vladimir Putin was asked why the Russian leaders, including Putin himself, had not visited South Africa before, despite an extremely favorable climate in the bilateral relations. The Russian president delivered a convincing answer to the question.

“The high-level visits are supposed to bring about new economic arrangements and give a boost to the development of bilateral relations. The high-level visits shouldn’t turn into some kind of business or political tourism. Such visits should be filled with concrete and serious content. To be honest, I should say that the Russian economy was in no condition to maintain large-scale and full-blown cooperation with many of its partners some 10-15 years ago. Back then the Russian economy was at a transitional stage leading to a market economy system. Nowadays the situation has changed dramatically,” said President Putin.

The words of President Putin may as well convey the crux of today’s foreign policy of Russia. Lately even the harshest critics of Moscow have begun to acknowledge the achievements of the Russian foreign policy. Russia’s energetic diplomatic efforts in Africa can be especially useful in terms of new opportunities that Russia may take for emphasizing the commonness of positions, and arrive at a greater and mutually beneficial compromise with the developing world. As for the economic development indicators, Russia and South Africa are two of the biggest market economies of the developing world.

The agreements reached during the visit of President Putin to South Africa may bear fruit soon. The indications are that Renova will invest in a manganese ore mining project, while RusAl will be involved in the development of electrical power facilities and construction of a smelter. Russia and South Africa have good prospects for cooperation in space technology and exploration, military-industrial complex, and medical equipment research and development.

“I believe we should be fortunate to have such an amount of interest and dedication expressed by Russian investors with regard to the development of this country,” said South African President Thabo Mbeki, in a comment on the above plans. Now the Russian companies should make the most of this historic chance and use South Africa as a secure bridge for launching further economic expansion in Africa.