The number of Russian women who married foreigners is measured in hundreds of thousands. 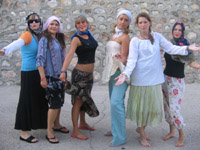 The scope of the population loss for our country is naturally close to 800-900 thousand per year as it is, and the amount of women lost to the “bridal export” is causing this number to resemble a Biblical disaster. Politicians familiar with these statistics attempted to react to the mass decrease of reproductive-aged women last spring by updating the Citizenship Law. The lawmakers suggested that young women willingly abandoning their country should have their Russian citizenship revoked. Unfortunately Duma did not support the project as only three people voted “for.”

As the report shows the girls who choose to marry away come from depressed regions of Russia . An ordinary $200 tourist visit to Antalia is usually stated as the reason for departure. After experiencing a two-star hotel these impressionable girls decide to stay in Turkey for good in order that “the holiday may never end.” There are basically no obstacles to their decision since to produce a marriage certificate Turkey only requires the home state’s confirmation that the girl is unmarried and a fee of $40.

There are also hundreds of local marriage agencies that provide service to the girls without potential fiancées. Sadly, life in Turkish provinces radically differs from a life in a recreational hotel, and the pages of women’s magazines are packed with heartbreaking stories of disappointed Russian women. But the marital migration’s coin has another side. Out of the 200 thousand only 60 thousand women remained in their new homeland and the other 140 thousand were used by the Turkish guys as a means of transportation: in order to immigrate and get legalized in Russia.