Russia is concerned about being abstracted from NATO's ABM plans

The two-day session of the Russia-NATO Council started in Brussels today. Members of the summit plan to discuss a variety of questions of reciprocal interest. The Russian Minister for Defense, Sergei Ivanov, participates in the talks on Russia's part. 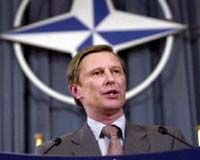 The agenda of the session includes issues of cooperation in the field of defense reforms, the operational efficient compatibility of the troops, the ABM defense, non-proliferation issues, struggle against drug trafficking, extremism and terrorism.

The members of the Russia-NATO council will touch upon the matters in Afghanistan, Iraq, Sudan and the Balkans. In addition, it is expected that the officials will also discuss the recent uprising in Uzbekistan, as well as the perspectives for NATO to render humanitarian help to the population of the civil-war-torn Sudan.

The question about the efficient compatibility of Russian and NATO troops will also be touched upon at the meeting, along with perspectives to establish the European ABM defense system.  “The North-Atlantic Alliance has approached the creation of the single ABM system, although we are not allowed to fully participate in the process. Unfortunately, NATO does not take our wishes into consideration on the matter,” RIA Novosti quoted a member of the meeting as saying.

The plan of the Russia-NATO cooperation for 2005 includes over 200 defense undertakings. The head of the Russian Defense Ministry will participate in the session of the Council of the Euro-Atlantic partnership on the level of defense ministers on June 10th. The ministers will discuss the influence of NATO's transformation on their partners, and the cooperation with them during joint anti-terrorist operations.

According to results of the morning session of the council, Defense Minister Sergei Ivanov stated that Russia was against the expansion of NATO-led activities within the framework of the “Active Endeavor” operation on the Black Sea. “We do not see any sense in expanding the mandate on the Black Sea,” Ivanov said in response to the statement from several European officials about the possibility to expand the mandate from 2006. According to the Russian minister, the “Active Endeavor” operation is similar to the functions, which Russia executes with Turkey – interception of illegal emigrants and weapons, including shoulder-fired missile systems.