The peculiarities of Putin’s salary and vocation

Vladimir Putin, the president of Russia , traditionally spends his holidays in August in Sochi. Evidently, this year will no exception. Soon Putin will be attending the Eurasian Economic Community summit there. A resort is a resort, but in theory the president is supposed to be working there: Putin is not arranging any sort of holiday for this period. For this reason, the head of state has already accumulated a considerable number of days off, according to an article in Moskovski Komsomoletz on Thursday. 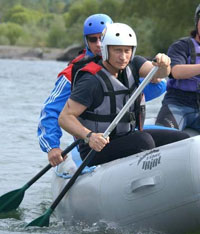 The peculiarities of Putin’s salary and vocation

Studying the information agency reports for the last few years, the word holiday has been related to the head of state only once, when Putin took a break in Belokurikha, in the Altai Mountains, in 2003. He went rafting on the mountain river of Charish , went horse-riding, rode on a water tram with Mikhail Yevdokimov and visited the aviary and the Siberian stag farm. The president was unable to avoid an incident however, as whilst horse-riding, he scraped his arm slightly on the branch of a tree. Rafting on the river, he had an amusing conversation with a local inhabitant who was fishing. The president, in his helmet, goggles and life-jacket showed an interest in how the catch was. “You’d better move on from here, Putin’s about to come this way!’ replied the man firmly to the head of state.

But the details of holiday moments in Sochi are generally not especially varied: he rode a water motorbike, swam, went for walks around the residence – all enumerated in the spaces between work meetings and talks with foreign leaders, recalls the publication.

It turns out that the president does take time off, but very little. Putin’s holidays since beginning his current post have accumulated to several months. “The president’s holidays are regulated by the law on state civil service and the Labor Code,” explained the president’s administration. The first document says that civil servants who carry out the highest and most important duties of state service should receive holidays of 35 calendar days per year. But this is not all; according to this same law, the president has the right to additional paid holidays for long service. This is based on the rule: one calendar day for each year of state service, in addition to the basic number of days off.

No one combined holiday in Russia should exceed 45 days. Bearing in mind that Vladimir Putin has been working in the state service for over 10 years, it comes out at exactly one and a half months. Before leaving for his holiday, the president is due two additional wages. The monthly salary received by the head of state currently stands at 146853 rubles (about 5500 dollars). In the case of his taking only part of his holidays, he has the right to a compensation sum or to accumulate the unused days off for another time.

It is worth noting that if he wishes to take a holiday, Putin must not write any statements or agree on his holiday plans with someone else. “The head of state can only notify the head of administration or the prime minister of his intention to go on holiday,” it was clarified in the Kremlin. But at the same time, Putin does not have the right to wallow in the sand and sea like an ordinary Russian, forgetting his work and ignoring all means of communication. “The program of authority for the holiday period is not foreseen and the president continues to fulfill his duties even whilst on holiday.”