The popularity of other Russian politicians pales in comparison with Putin's

Russian citizens vote for Vladimir Putin as an efficient head of state, not as a politician, whose views they can possibly share. This conclusion can be made from the analysis of the electorate rating and the rating of trust, which the Russian president currently enjoys. 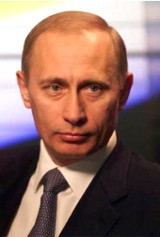 Forty-five percent of respondents would be ready to vote for Vladimir Putin, if the presidential election were to take place in the near future, the Public Opinion Fund said. Putin still enjoys the highest electorate rating, which makes the president the undisputable leader as opposed to his competitors. Fifteen percent of respondents denied their wish to participate in the election, although another 15 percent said that they found themselves at a loss in answering the question. Gennady Zyuganov, the leader of the Russian Communist Party, and the answer “I would vote against all candidates” share the second and the third places on the list respectively with only five percent of votes each. The popularity of other Russian politicians pales in comparison with Putin's. Notorious politician Vladimir Zhirinovsky, the leader of the Liberal and Democratic Party of Russia (LDPR), can boast of having only four percent of people's support, whereas Grigory Yavlinsky or Irina Khakamada have only one percent of potential voters.

When respondents were asked to enumerate several politicians, whom they trusted personally, Vladimir Putin's advantage was not so overwhelming, although his rating was still the highest. Twenty-five percent of respondents said that they found the Russian president a trustworthy politician. LDPR leader Vladimir Zhirinovsky follows Putin, albeit at a considerable distance – only nine percent of supporters.

Vladimir Putin has become the only Russian politician, whose rating of confidence is twice as less as his electoral rating. One may say that Russians do not see any alternative to the incumbent president, but prefer to vote for the only one person, whom they view as acceptable. On the other hand, Russian voters' perception of the president is totally different from what can be observed with other politicians. It is not ruled out that Russians do not perceive Putin as a politician at all: the confidence to politicians has been traditionally low in Russia.