Laura Bush and Lyudmila Putin do not understand their husbands' jokes

Mrs. Putin discusses important questions with the president, when he sits down at table to have a drink before going to bed 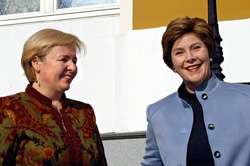 Lyudmila Putin does not see her husband often. Moreover, she hardly has a chance to speak to him. Mrs. Putin discusses important questions with the president, when he sits down at table to have a drink before going to bed.

”He works too hard. All members of our family know it. If someone of us wants to talk to him, we have to wait for the time when he sits down to have a cup of kefir before bedtime,” Lyudmila Putin told the Rossiiskaya Gazeta. Mrs. Putin added that no one else of the president's family drank kefir.

According to Mrs. Putin, Vladimir Putin has never taken an active part in raising children. Putin would always tell his wife what he wanted, whereas she would make decisions and then forget that it was actually her husband who wanted that decision to be taken.

Lyudmila Putin said that they never tried to economize on their children's education or holidays. She also complained of her husband's peculiar sense of humor. “It is hard for me to understand black humor and irony. I like simple and kind humor, although I cannot say that we have only this kind of humor in our family,” Mrs. Putin said.

Neither Lyudmila, nor Vladimir Putin exhaust their daughters with conversations about morality. The parents never ask their daughters which marks they get at school. They allowed them to miss school classes if they were too tired of studies, although Vladimir Putin's daughters had to study at home at times. “A child has to go to school early in the morning and stand the stressful situation for ten hours there. Being a housewife, I can get really tired when I switch from one decision to another during the day. Children have to switch from one subject to another every 45 minutes. They have to do homework, answer questions at classes and receive marks. Teachers and parents can criticize them for those marks. Can you imagine what colossal stress it is?” the Russian president's wife said.

Despite such a liberal method of upbringing, Lyudmila Putin is happy about her children. The girls can speak three languages; they respect their country. They rarely use slang in their speech in spite of their young age, Mrs. Putin said. The daughters want to learn how to speak languages beautifully, not only correctly.

The Russian president's wife is certain that her husband is doing his best for the development of democracy in the country. Lyudmila Putin feels rather offended when the media disagree with her at this point. Mrs. Putin said that open lies could be really hurtful for her, because she could see that her husband was spending all his time and energy to unite Russia and take the country on a certain level of economic development, Newsru wrote.