The Russian Federation Chairmanship of the G8 summit in St. Petersburg had chosen three main areas for action – education, energy supply and the fight against infectious diseases. The documents pertaining to these areas, which had been prepared during the year leading up to the Summit, were approved in the morning session today. 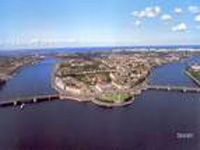 The document signed today provides for greater cooperation between the private sector and the state in education, provides education programmes for migrants so that they can become full members of the communities which receive them and stresses the importance of providing more aid to the innovation sector of professional training schemes.

The document on energy supply concentrates on the security of supply lines to countries already receiving energy and highlights the need to provide energy to developing countries, approaching what the Summit referred to as “energy poverty”.

President Vladimir Putin had already told the J8 Summit that “There are sufficient hydrocarbon resources in the world and the only issue is that their cost is rising.” He stated that the answer is to set up more infrastructures at deposits.

Gennady Onishchenko, Russia’s chief doctor, stated that the question of infectious diseases is the one issue which concerns practically everyone on the planet. The documents signed today will provide for Anti Retroviral Treatment for all AIDS patients by the end of the decade. The fight against AIDS was also one of the main concerns arising from the Junior 8, or J8 Summit, held last week.

Also under the agenda will be the setting up of a regional coordinating body for Eastern Europe and Central Asia to develop a HIV vaccine. The G8 leaders committed themselves to the Global HIV Vaccine Enterprise.

On the environment, the G8 leaders produced a joint statement in which they promise to fight the Greenhouse Effect and “deal effectively with climate change”.

“We also affirm our commitment to the UN Framework Convention on Climate Change’s ultimate objective of stabilising greenhouse gas concentrations in the atmosphere at a level that prevents dangerous anthropogenic interference with the climate system,” the statement continued.

The crisis in the Middle East inevitably entered the agenda, with President Vladimir Putin declaring that “We condemn any terrorist acts, including kidnappings. But there is the impression that Israel is pursuing other, broader aims other than returning the abducted servicemen”.

Regarding Iran, Vladimir Putin declared that a united and uniform approach by the six mediators is more effective than some nations taking tough positions. A uniform approach is “the most effective solution to the Iranian nuclear problem,” he stated.