A crowd of people, wishing to take a look at the Russian president, was trying to approach Putin

President of Russia and Kazakhstan corrected the decision that Russian and Kazakh prime ministers made in March of the current year. According to the decision, the citizens of the two countries were supposed to have passports to travel from one country to another. Vladimir Putin and Nursultan Nazarbayev agreed that a passport would not be required. 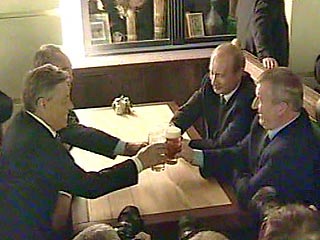 The meeting of the two presidents took place in the Russian city of Chelyabinsk. Having laid wreaths to the Eternal Fire, Putin and Nazarbayev went to see the city.

A crowd of people, wishing to take a look at the Russian president, was trying to approach Putin, but they hardly had a chance to see the president at close range. The people spent three hours waiting in the central street of Chelyabinsk, hoping to see Vladimir Putin. When they finally saw the Russian leader from afar, the crowd of people started screaming “Hurrah!” The luckiest ones had a chance to shake Putin's hand and touch the sleeves of his jacket.

Having seen the local places of interest, the two presidents visited an Irish pub. Putin and Nazarbayev ordered Harp and were enjoying their beer traditionally - with jokes and laughter. It is noteworthy that Putin's favorite beer is Radeberger.

The waiters of the pub were warned about a possible visit of the VIP guests. Having taken the first sip, the president of Russia relaxed, said hello to the people sitting at another table and left his autograph to the pub.

It could be seen from the gestures of the two presidents that the beer was strong enough. Kazakh President Nursultan Nazarbayev obviously enjoyed his beer, the Kommersant newspaper wrote. 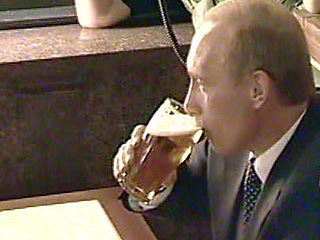 When the presidents finished drinking beer and eating in the pub, they went to a local skating rink. A local well-known skater, who was meeting the leaders of the two countries, wondered if Vladimir Putin could skate. The Russian president can ski, drive a KamAZ truck, pilot a plane and do judo, but he does not skate. “The hooves slide apart,” Putin joked, meaning that he can not stand on ice wearing skates.

Putin and Nazarbayev carefully avoided the discussion of the problem in Uzbekistan. Journalists did not have a chance to ask this question to the leaders of Russia and Kazakhstan either: the scheduled press conference had been canceled, Newsru writes.