A variety of festive undertakings are currently taking place in Moscow within the scope of Victory Day celebrations. The Victory Parade on the Red Square of Moscow became the central event of the day. The parade ended at about 11 a.m., when MiG-29 and Su-25 fighter jets flew above the square. The parade lasted for one hour. 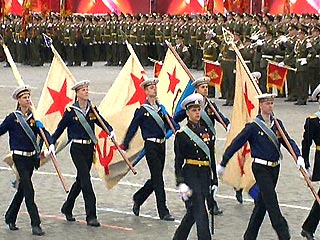 Foreign guests started arriving in Moscow's Kremlin from 9 a.m. President Vladimir Putin and his wife, Lyudmila Putin, were meeting guests of honor in the Kremlin. Photographers took pictures of every foreign guest with the Russian president and Russia's first lady. After that, President Putin headed for the VIP tribune, where he took his seat next to US President George W. Bush.

President Putin congratulated all Russian people and the whole world on such an important day. In the speech Putin emphasized the need to maintain peace in the world, based on security, justice and new culture of international relations, which would exclude both “cold” and “hot” wars. 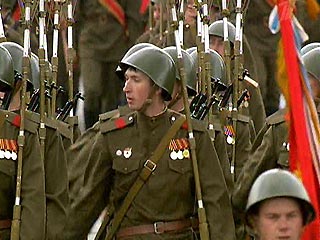 The parade on the Red Square consisted on two parts – the historical and the contemporary sections.  Over 7,000 Russian servicemen dressed in the military uniform of WWII years marched across the square in columns. Organizers of the Victory Parade were highly meticulous in their approach to select the servicemen for such a solemn occasion: even dogs of the sapper unit were as like as two peas.

When war veterans appeared on the Red Square, the spectators gave them a standing ovation.

The contemporary part of the military parade followed shortly. Modern units of the Russian army, which participated both in the Chechen military campaign and in peacemaking operations in other countries, marched across the square. 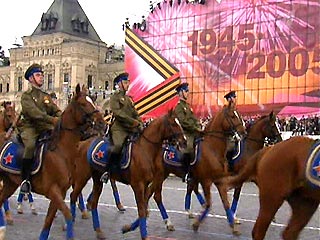 When the parade was over, President Putin and all foreign guests went to the Grave of the Unknown Soldier, situated behind the Kremlin wall of the Red Square, for the solemn ceremony. Guests of honor laid flowers - red carnations - to the monument, which was built to honor the Russian soldiers, whose names had been lost in the most tragic war of the 20th century. Servicemen laid a large wreath of red roses to the Eternal Fire of the monument. 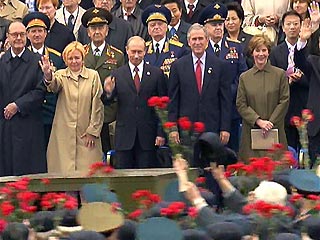 Festive celebrations of the 60th Anniversary end of WWII will be over with a salute of 30 salvoes. Fireworks will illuminate the sky above Moscow, in all administrative districts of the city.

Putin,Bush, Chirac, Schroeder, Koizumi, Hu Jintao, Berlusconi, Yushchenko, Nazarbayev and many other political leaders will honor those, who fell in fierce battles against Nazi troops: a moment of silence will take place in Russia nationwide at 8 p.m.

After the official reception in the Kremlin, presidents and prime ministers plan to communicate with each other. US President George Bush talked to American and Soviet war veterans. German Chancellor Gerhard 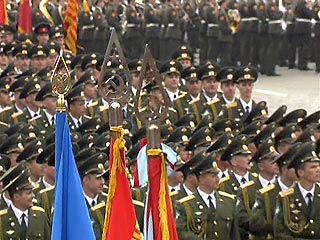 Schroeder had a conversation with veterans and youth from Germany and Russia. Schroeder also plans to visit the German military cemetery in Moscow's Lyublino. Japanese Prime Minister Junichiro Koizumi would like to visit the same cemetery too. Mr. Koizumi added that he would have an official meeting with Russian President Putin on Monday.

Italian Prime Minister Silvio Berlusconi plans to conduct a series of bilateral meetings in Moscow as well. French President Jacques Chirac said that he would like to see Russian and Chinese colleagues and to unveil the monument to Charles De Gaulle in Moscow's Peace Avenue. 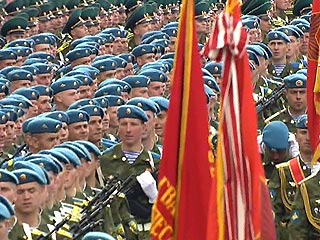