The fate of 'martyr' Mikhail Khodorkovsky to be announced later

Expecting the verdict in the trial of Yukos's CEO Mikhail Khodorkovsky and his business partner Platon Lebedev, the liberal and democratic society of Russia started preparing for something more solemn than that and ascribed the oligarch in disgrace to the holy rank. “Mikhail Khodorkovsky – Superstar” might become a good title for a new rock opera that Russian showmen and composers could write. 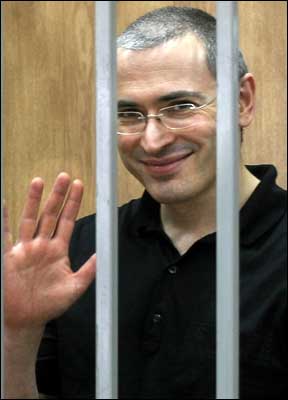 Common people already think of Mr. Khodorkovsky as a martyr, who suffers for truth. Such an opinion has been created in the Russian society with the help of “democratic” forces of Russia. One element was missing in the picture, though, but it was later presented from Khodorkovsky's prosecutors.  The original date of the verdict coincided with an important event of religious significance for Orthodox Christians – the pre-Easter Holy Week. The sentence should have been announced today, on April 27th, although the judicial authorities postponed the date till May 16th.

There is a great number of Russian public and political figures, who try to use Mikhail Khodorkovsky's name for their own promotion. They urge the authorities to be just and honest, although they also wish Yukos's CEO a long life in jail. If Khodorkovsky is released, it will be the end of a nice legend, for which they are ready to sacrifice the man's life and classify him as a martyr.

As a result, the Meschansky Court of Moscow delayed delivering the verdict in the  tax evasion and fraud trial, which made one of the most scandalous processes in the judicial life of Russia: the Yukos case. The sentence will be brought down on Yukos's CEO, Mikhail Khodorkovsky, on May 16th, after President Putin visits Israel, after Russia celebrates the 60th anniversary of Victory over Nazism, after the Russia-EU summit ends and after Easter holidays in Russia (this year Orthodox Christians celebrate Easter on May 1st).

It is worth mentioning that the delay of the verdict has become a great surprise even for the defendants' lawyers. Platon Lebedev's defense counsel, Yevgeni Baru, stated that the reason of the delay would have to be investigated. “It can be a very usual reason too  - a judge must have fallen ill, for example. I can not comment other reasons outside the legal framework,” the lawyer said.

”When I was told that the sentence would be brought down on April 27th, I was unpleasantly surprised,” lawyer Genrikh Padva said. “It is impossible to deliver the verdict on such an important case that quickly,” he added.

The majority of Russian observers were certain that Mikhail Khodorkovsky would stay in prison: the Kremlin administration supposedly found the businessman guilty long ago, and the court would simply have to read out the text of the decision.

A spokesman for the Meschansky Court said that the announcement of the sentence had been delayed for a quite prosaic reason: they did not have enough time to write the text of the sentence.