Experts of the Stockholm International Peace Research Institute have prepared another report about the export of arms in the world. The specialists calculated that Russia has become world's largest exporter of weapons during 2000-2004. The Swedish experts based their report on the military value of the delivered weaponry. Judging upon the income, which Russian exporters have received during the mentioned period, the country ranks only third or fourth on the list. 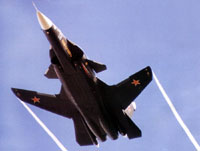 The research shows that Russia has considerably increased the sales of its weaponry abroad and even managed to leave the USA behind (the USA was taking the leading position in the field before 2000). The gross arms sales profit of the USA reached $53.4 billion dollars at the end of the 90s, whereas Russia could boast of only $16.4 billion.

SIPRI’s statistics is based on a special method of calculation. The rating was made on the ‘military value’ of the delivered arms, but not on their actual cost. An expert with SIPRI said that the estimates of the institute based on the number of delivered planes, tanks, missile systems, etc, did not reflect exporters’ financial results. The Swedish experts have not used the cost of the delivered arms because it is very hard to receive the comparable data on account of different national calculation systems.

Russian weapons are usually cheaper than their Western analogues. Therefore, the financial outcome of a deal is a lot lower than the ‘military value’ of the sold military items. For example, in 2002 Russia sold about 60 Su aircraft and 25 MiG planes. SIPRI proceeded from the cost of each Su-30 plane equating it with the price of the US-made F-15 ($50 million), although the real price of a Russian pursuit plane can be under $35 million.

Konstantin Makiyenko, a spokesman for the Center for Strategies and Technologies, said that Russia followed the USA, France and probably Great Britain from the point of view of the income received from arms sales. The Russian defense industry has been developing very fast lately, which means that the volume of arms exports will continue to grow.

The Stockholm International Peace Research Institute is one of the world’s leading centers analyzing the global defense market.