In spite of bans by the authorities, fierce quarrels, threats from ultra religious and simply hooligan groups, they did it! On Saturday representatives of sexual minorities carried out the first ever Russian gay parade in Moscow (pictures). Admittedly, it was not totally gay – and not quite a parade. For several hours in the centre of the capital thousands of soldiers from the internal forces, officers of the Special Police, Orthodox Christians, Cossacks, young hooligans and punks formed a mob, shouted and cursed the sodomites. It was hard to find any actual homosexuals in this sea of people. 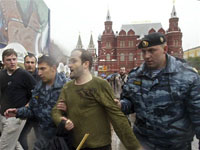 Back on Friday it was clear to even the naïve members of the European Parliament and German Bundestag who had arrived for the Moscow gay forum that there would not be a large procession of minorities on the streets of Moscow. The authorities had banned it, the court had upheld this decision. The organizers of the gay parade promised that they would go out onto the streets anyway, but they would only say at the very last moment, on Saturday at the closing of the gay forum, exactly where and when.

At 12 a press conference appealed for everyone who had gathered not to carry out a gay march, but instead at 14.30 quietly place flowers on the Tomb of the Unknown Soldier in Alexander Gardens (by the wall of the Kremlin). The organizers made a point of stressing that these would be individuals “paying their respects to the soldiers who fought against Nazism, the most homophobic ideology”, therefore would not need permission from the authorities. Furthermore, the organizers of the gay forum emphasized that entrance to Aleksandrovskiy Gardens is free for everyone…

Hardly! By 10am police and Special Police forces had been called to gather on Manezh Square. They also took up positions at other key points around the capital. And according to a representative of the Union of Orthodox Citizens, voluntary helpers for the police were also patrolling the streets, ready to phone 02 at any signs of ‘gay’ activity.

By 1pm Alexander Gardens and Manezhka were surrounded by rows of police and riot police. Inside the gardens it was only the lone guards of honour who could be seen. Even newly-weds who had come to place flowers by the Eternal Flame were not allowed in, even though there could be no doubts about their sexual orientation.

By 2pm rain drove away all the people strolling on Manezhka. It was only policemen and numerous journalists who got wet.

Finally the long wait was rewarded. A bald man in an exquisite suit forced his way through to the railings around Alexander Gardens. That is usually what singers look like in elite gay clubs. But the man was not one of them. He spoke about the ‘Russian soul’, about how homosexual activity is unacceptable in our society etc.

Other crusaders against the ‘gay threat’ also drew up: old women with icons, men adorned with badges in the shape of the St. George’s cross, and also young people without any distinguishing symbols, but whose faces expressed the clear desire to beat up “any perverts”. At the closed gates of Alexander Gardens a living defensive shield of Cossacks was formed, wearing their parade uniforms.

Finally the Special Police Force forced the crowd away from Alexander Gardens, and they all went their separate ways. Some sang psalms, others chanted “Moscow is not Sodom”.

A small number of gay people who had peacefully come with flowers just smiled as they observed what was going on. Those who tried to say something “to the cameras” were directed onto Special Police buses.

However, soon some more pressing concerns appeared for the police. In the absence of a gay parade, some radical youths set off to attack the State Duma on Okhotniy Ryad. Before the ‘militants’ were arrested, they had time to throw some petards.

Then the action switched to the Dolgorukiy monument. Thesamebald man in the elegant suit talked again about patriotism. A representative of the Les-Bi movement Evgeniya Debryanskaya tried to put up some competition to him, but it was impossible to hear what she was saying.

“Down with lesbians!!!” roared several dozen men, jabbing their fingers at her in disgust. Debryanskaya had water poured over her, but she carried on speaking. The Special Police officers did not tolerate this any more. They grabbed the woman’s arms and dragged her off to their van.

It must be said that on the whole the police acted properly and efficiently. They managed to drive back the crowd from Dolgorukiy and disperse it along Tverskaya. But this tolerance on behalf of the police merely inflamed the passions of the young homophobes. They ran along the nearby side-streets for a lot longer, seeking out “gays”. It was then that dark-skinned Frenchman Pierre Serne and Volker Beck, a representative of the German Green party and deputy in the Bundestag, were beaten up, along with several other people. The police were quick to react and even arrested Mr. Beck. Admittedly, having apologized, the minions of the law quickly released him.

By 16.00 the weather had changed. The sun had come out and lit up the strange images on Tverskaya.

“Come on guys, it’s all finished now. Let’s go to the metro and then you all go home!” the police good-naturedly exhorted the young men in their black leather jackets.

“In a minute, we’ll just finish smoking and then we’ll go,” the youths agreed, lighting up along 24th and looking round in search of any “gays” walking on their own.

At this moment some participants in the gay forum, who had not been spotted by the crowd, were walking quietly through the crowd with the mournful expressions of Decembrists, trudging along to do their forced labour. This was all accompanied by the religious procession of old women with icons who were continuously walking backwards and forwards from Pushkin Square to the lines of Special Police by Tverskaya.

In the end everyone seemed happy. The police officers who had quelled the disturbances without any particular problems. The journalists who had snapped a load of dynamic shots. The gay contingent who had secured the sympathy and support of European politicians and the public. And young people who had shouted and caused trouble without being punished.

Bertrand Delanoe – Mayor of Paris. He has openly declared his homosexuality. Before him the most famous gay city administrator was the Mayor of Winnipeg in Canada, Glenn Murray. In October 2002 a certain Azedine Bercan carried out an assassination attempt on the Parisian mayor, wounding him. He explained his attack by saying that he doesn’t like politicians and he especially doesn’t like homosexuals.

Pier-Kristian Foss – ex-Minister of Finance in Norway. He became well-known as the first Norwegian minister to openly declare his unorthodox sexual orientation.

David McReynolds – American left-wing politician, the first gay person to run for the post of US president. In 1980 he managed to garner 6898 votes, but at the 2000 elections only 5602.

Meanwhile there are rumours about Tarja Halonen, the President of Finland’s sexual orientation. She is married to Dr. Pentti Arajarvi. But in 1980-1 Tarja Halonen was chairman of the SETA organization, the main force fighting for the rights of gays, lesbians and bisexuals.

Read the discussion of this article on Pravda.RU English forum: