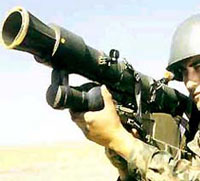 Now  the Syrian president can sleep tight. No Israeli aircraft will be flying over his palace in Damask because Russian-made air defense systems Igla-8 will be on standby. Syria plans to buy state-of-the-art weapons in Russia while its defense minister is trying to convince the international community that Syria is ready to hold peace talks with Israel and wants to pursue a policy of constructive cooperation.

The reports on a potential sale of Russian air defense systems to Syria were confirmed by Russian President Vladimir Putin. Speaking to an Israeli TV station, President Putin said that the weapons would be shipped to Syria in the near future. President Putin denied allegations that the sale would disrupt the balance of power in the region. He said that Russian missiles would have no effect whatsoever on Israel's military capability which is far greater than that of Syria.

The Israeli government has not commented on the deal so far. The Israeli government repeatedly said that Syrians should first cease providing their support to the Palestinian terrorist organizations prior to seeking a truce between the two states. The Israelis seized Golan Heights during the war in 1967. For nearly 40 years the Syrians have been calling on Israel to pull out its troops from that disputed area and respect the 1967 borders between the two countries. Israel refused to pull out its troops from the occupied Golan Heights.

An agreement on the final debt redemption will be part of a new era in Syrian-Russian cooperation. The agreement on redemption of Syria’s debt to Russia will be signed in April this year. Russia already forgot 73% of the Syrian debt in January this year. Syria shall pay back the remaining $3 billion 618 million of its debt to Russia over the period of 10 years. Another agreement is expected to give a boost to trade between the two countries. As a rule, Syrian exports to Russia include textile goods and agricultural products. Russia exports machines and industrial equipment to Syria.

Syria will undoubtedly benefit from the new phase of its cooperation with Russia. Closer relations with Russia may give Damask an opportunity to improve its position on the international political stage at a time when USA and other countries keep mounting pressure on Syria.