Russia should get the Arctic ready for global warming

World oil prices are continuing to rise steadily despite recent statements by OPEC regarding production quota increases. The warmer days of spring seem to have no effect on the upward trend of the world oil market. According to certain pessimistic forecasts, Russia's reasonable assured and profitable reserves of strategic natural resources may be exhausted in ten years. 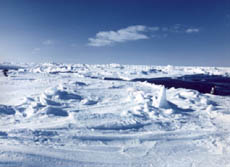 However, Russia may gain benefit from the exploration of the Arctic's vast vaults would be unlocked by global warming. The freeze-up period on the Northern Sea Route is expected to shorten significantly in the next 10-15 years and therefore mineral resources of the North will be much easier to carry both to Europe and Asia. The estimated value of the Arctic's minerals totals $1.5-2 trillion. The Russian government has recently started drawing up a law on the Arctic economic development to boost the economy of northern regions.

The concept of industrial development of the Arctic area is likely surprise a lot of people. The authorities have unfairly neglected Russia's northern regions in the last few years. Besides, the Russian legislation lacks a clear-cut definition for the Arctic and its boundaries. High taxes and transport costs impede the economic development of the area. The volumes of cargo shipped by the Northern Sea Route decreased considerably since the 1980s.

The threat looming over Russia's security in the area of raw materials made the Kremlin put the above issue on the agenda last year. Speaking at a meeting with Russian polar explorers in the fall of 2004, President Putin stressed the importance of the Arctic for Russia's economic and political system. He said: “I hope that all our investments in the Arctic including funds, equipment and an enormous amount of human effort, will not be wasted. Instead, everything that Russia invested in the Arctic before and during the Soviet era will be used as a good basis for developing our new projects in the Arctic.”

Following the president's comments, the government stepped up its efforts in drawing new laws relating to economic development of the Arctic. Russian Ministry of Economic Development and Trade is working on a law to change the distribution mechanism of budget subsidies for northern regions. The government is also taking steps for developing an international strategy applicable to economic activity in the territories located north of the polar circle. The amount of mineral resources concentrated in the Arctic zone is huge. For example,  91% of natural gas production and 80% of Russia's explored reserves of industrial-grade natural gas are amassed in that region. It also contains 90% of all Russian extractable offshore reserves of hydrocarbons.

The hydrocarbon deposits in a deep-water area of the Arctic Ocean are estimated in 15-20 billion tons. The Arctic also has deposits of nickel, copper, wolfram, gold, silver, manganese, chromium, and titanium. 11% of Russian GDP and 22% of Russian exports are produced in the Arctic. The Northern Sea Route, a major national transportation route, links the Russian Far East to western areas of the Russian Federation. Its length is 5,600 kilometers.

Russia took the chair of the Arctic Council last year. The organization was founded in 1996. Apart from Russia, the council comprises Canada, Denmark, Finland, Iceland, Norway, and Sweden. Until recently it was mostly concerned over environmental issues of the arctic zone. The northern countries also tried to take steps aimed at protecting the Arctic against the effects of global warming. Being the only northern country involved in active development of mineral resources in the Arctic, Russia shares the concern about the environment.

In particular, the thawing of arctic ice could cause soil erosion. It could even do damage to the infrastructure of buildings, industrial facilities, and pipelines built on the permafrost. On the other hand, the global warming could be quite beneficial to Russia. Speaking at a meeting of the Arctic Council in Yakutsk, Vladimir Morgunov, assistant to the Russian Economic and Trade Minister, said: “The Arctic Council states should take steps that would enable them to minimize the damage caused by potential negative effects while taking maximum advantage of positive effects of the global warming.” The Northern Sea Route may be completely ice-free by 2020-2035 if arctic ice continues to thaw at a present pace. In that case a short transportation route going across Russia will connect Europe with Southeast Asia. According to Mr. Morgunov, “the route will have great potential for cargo traffic.”

Experts say that modernization of arctic ports should be regarded an issue of high priority in terms of the development of the Northern Sea Route. All those ports save port of Dudinka are still one of the weakest components of the transportation system. The owners have been unable to overhaul and upgrade port equipment since 1990 due to lack of funds. The majority of the ports are in need of repair or restoration of their mooring facilities. The same applies to the facilities for collection and utilization of vessel's waste materials. The ports have no equipment whatsoever to combat oil spills. Besides, the fleet of nuclear-powered and motor-driven icebreakers should be upgraded. The navigational and hydrographic services should have state-of-the-art equipment and efficient personnel.

It is necessary to put a few things straight prior to improving financing of the northern regions. As it turned out, two thirds of Russia's territory were officially ranked among the northern regions. They receive special subsidies from the state budget (the so-called “northern allowances” to increase regular salaries of those who are employed with state-funded organizations). According to Mikhail Zhukov, director of All-Russian Research and Coordination Center under the Ministry of Economic Development and Trade, 13 out of 41 subsidized regions have nothing to do the Russian North regions. Those bogus northern regions get the biggest subsidies. In 2002, the central government allocated 55 billion rubles to the regions whose “northern status” did not even meet geographic requirements. In the meantime, residents of the northern and arctic areas received only 38 billion. New methods for zoning the whole country have been recently produced by research institutes at the request of the Ministry of Economic Development and Trade. Russia will be divided into six zones on the basis of nature and climate. Only the regions lying entirely or in part north of the 60th parallel are to be listed as “northern regions.” Defining the boundaries of the Arctic zone will help resolve many economic and social problems of the regions pertaining to the area.