Russia is not going to become a full member of the financial Group of Seven, in spite of the fact that it is to hold the chairmanship in the political Group of Eight the next year. The statement about the perspective was released by US Undersecretary of the Treasury, John Taylor. 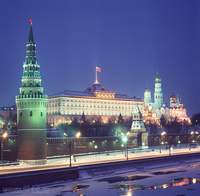 According to the usual practice, the country, which chairs the political G8 will also become the chairing state in the meeting of finance ministers and directors of central banks of the leading industrial countries, Bloomberg said. However, there has been a vexing exception made for Russia. The process of holding G7 sessions will continue in their usual order. Russia will only be able to participate in the series of sessions, Taylor said.

Russia has been participating in G7 meetings for ten years already, albeit at separate sessions only, Interfax said. Bloomberg received the news about Russia's special status in the Group of Seven from an anonymous source in the beginning of March. Official spokesmen for the G7 say that the Russian economy with the GDP of a bit more than $500 billion makes the country rank only 16th. The Russian economy, therefore, is not large enough to let Russian ministers and officials enjoy equal rights with G7 leaders.

Western official figures believe that the Russian economy experiences a strong lack of investments, free markets and the dictatorship of law, not to mention other disadvantages.

The meetings of G7 leaders, which took place in Washington yesterday, touched upon such issues as the change of the head of the World Bank, rendering assistance and writing off debts to poorest countries. In addition, the sides discussed preparations that Russia should take on the threshold of its chairmanship in the Group of Eight in 2006.

G7 was formed in 1971 as a result of an informal meeting between finance ministers of the USA, France, Germany and Great Britain. Japan joined the group in 1973; Italy and Canada followed in 1986. It is noteworthy that Russia is a full member of the Group of Eight summits, where presidents of eight countries participate.

Aleksei Novikov, the director of the Moscow office of Standard & Poor's, agrees that Russia's financial and economic role is not enough yet to make the country a full member in the Group of Seven. “The role of Russia is not big enough yet, and it can not be compared with the role of G7 members,” Novikov said in an interview with the Echo of Moscow radio station. However, Russia's participation in the G8 can be characterized as the global acknowledgement of its political and geopolitical role, the expert added. “As far as financial issues are concerned, we will have to wait a while at this point, Aleksei Novikov believes.