President Putin submitted the bill “About the introduction of changes to legal acts of the Russian Federation about elections and referendums” to the State Duma yesterday. Once the bill is approved, the event will mark the completion of another election reform. The role of political parties is expected to grow considerably in Russia, especially for those political organizations, which can be presently found in the lower house of the State Duma. It is worth mentioning that new parties will have to face considerable difficulties, if they decide to become new members of the “political club.” The bill will therefore put a final stop in the long dispute pertaining to the political organization of Russian parties. 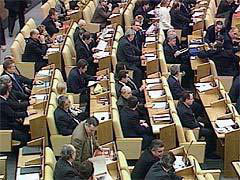 Vladimir Putin's new draft law is virtually based on the idea to establish the so-called vertical of power in the party system of the nation. The president believes that political parties of the current State Duma will play the key role in the process, The Kommersant newspaper wrote.

The function law already contains certain considerable preferences for such parties. The most important one of them gives parties an opportunity to nominate candidacies for elections of all levels without the need to collect signatures and pay the election pledge. The Kremlin decided to toughen the rules to join the “political elite club.”

New or small parties that have nothing to do with the so-called “group of four” (United Russia, the Communist party, Fatherland and Liberal and Democratic Party) will have to use new regulations to collect people's signatures in their support or pay the election pledge. The maximum acceptable percentage of fake signatures has been reduced from 25 to 5 percent. Even large and experienced parties can boast of achieving such perfectionist activities during signature-collection activities that they had to conduct before. As experience shows, election committees do not have to take much effort to oust undesirable candidates from elections, when they check the collected signatures.

In addition, the parties that wish to make their way to the Duma, will not be allowed to unite into blocs during regional elections. Non-parliament parties used to practice the method, which usually yielded quite good results.

According to Putin's draft law, there will be a single voting day set for both regional and municipal governmental agencies. The continuing sequence of elections throughout the year proved to be really tiresome for the majority of Russians: the turnout on regional elections was registered on a rather low level. If elections take place simultaneously in a lot of federation units, only viable parties will survive the pre-election race.

The parties, which prove to be successful at federal elections, will be able to obtain considerable financial profit. The bill stipulates that the state funding for such organizations will be increased ten times from January 1st, 2006.

Another novelty touches upon the party activity in the State Duma. The presidential draft law introduces the brand-new rule of the so-called imperative mandate. If a deputy that has been elected to the lower house on the lists of one party decided to move to another faction, he or she will be deprived of deputy's privileges. The new regulation will definitely add more stability to the structure of Russian parties.

The new draft bill will therefore strengthen parties' positions in the parliament on the one hand and create as many difficulties as possible for outsiders in their intention to join the supreme party league on the other hand. The new political system will probably be formed in Russia by the next parliamentary elections, which are slated to take place in 2007. The new system will relieve the Kremlin of its concerns regarding the result of the 2008 presidential election in Russia.