The conscription campaign that started in Russia ten days ago does not apply to one of its regions, namely the Chechen Republic. Gen.-Maj. Saed-Selim Tsuev, commandant of Chechnya, made an official statement last week as to the cancellation of conscription. His earlier statements indicated that local draft boards were ready to carry out the job. Then the official said that the conscription had been canceled in line with new instructions from his superiors. The Russian military command is undoubtedly regarded as superiors to the commandant of Chechnya. However, Gen.-Lt. Vasily Smirnov, chief of the Main Organization and Mobilization Directorate of the Russian General Staff, did not comment on the cancellation of conscription in Chechnya. 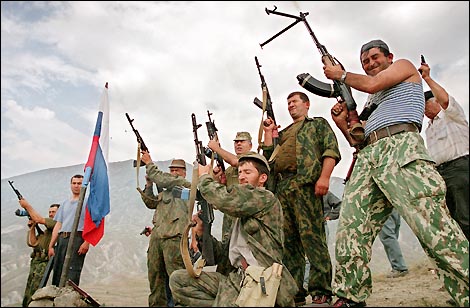 He just said that the army normally conscripts from 700 to 1,000 persons a year in Chechnya, but those conscripts are stationed within the republic in order to avoid incidents that took place when the Chechens were sent to other regions of Russia. Ruslan Yamadaev, the State Duma deputy whose brother is in charge of the Vostok battalion, a unit under command of  42 Division of the Russian Ministry of Defense and composed entirely of Chechens, said to Vremya Novostei that no recruitment figures had been forwarded to Chechnya as to the national conscription campaign. He said that the authorities would definitely recruit persons for the local military units. According to him, about 200 persons are enlisted each year to the Vostok battalion by the local draft boards. Servicemen are actually hired for about 12,000 rubles a month, a nice salary for Chechnya where the majority of population is unemployed.

There were no regular recruitment campaigns in Chechnya after the first war. Chechnya became independent de facto, and separatists were drawing their own lists of personnel to be drafted to “the army of Ichkeria.” The first conscription campaign in accordance with the Russian law went under way in the fall of 2000. More than 600 people were drafted at the time. Part of them was sent to Russia. The experiment proved a failure. There were numerous reports on disputes and conflicts involving the Chechen draftees stationed in Russia. According to the army experts, some of them even fled Russia to join the hostilities in Chechnya. As a result, the Russian military decided to keep the Chechen conscripts inside the republic. The situation is getting more complicated since the Chechen units of the federal forces are fully staffed and the Russian Army Headquarters in the Northern Caucasus need to consider the enlisting of additional personnel every time the issue comes up. It is still unclear whether a decision was taken this time around. About 7 thousand persons are registered by the draft boards in Chechnya, according to Chechen commandant's office.

The number can hardly stand comparison with the total number of Chechnen population which exceeds a million person as by official records. It is equally beyond comparison with the number of local police and security personnel, such as the Security Service of the Chechen President Ramzan Khadyrov. Some experts believe that as many as 30,000 persons serve in those units. Most of those servicemen were rebels in the past and they are not officially registered with any draft boards, they are well-armed and have hands-on experience with combat.