What does the Russian president eat?

For a long time it has been considered that Russian president Vladimir Putin doesn’t have any culinary preferences, however Putin’s wife revealed in her book some secrets about presidential meals. 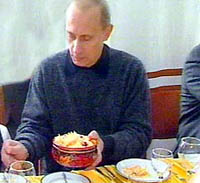 What does the Russian president eat?

Putin himself says that he prefers eating healthy food: tomatoes, cucumbers, lettuce and other vegetables. In mornings the Russian president usually eats different porridges, curd and honey. Despite his favorite meat is mutton, Putin prefers fish. He says that he is completely indifferent to sweets; however ice cream is his passion.

At first sight one can think that Putin eats plain food and is not picksome and choosy as far as food is concerned. However the president’s wife doesn’t think so. Lyudmila Putin considers her husband to be very fastidious in food. She says that if her husband doesn’t like a tiny detail in a dish he will surely refuse to eat it.

The Russian president never praises his wife for the food she cooks for him because he follows two main principles in his family life: “woman must do all the work at home” and “one shouldn’t praise a woman not to spoil her”.

At official meetings Vladimir Putin eats little and very fast. Some of his colleagues explain it saying that he is just doing his job.

Vladimir Putin like the presidents of many other countries has to pay plenty official visits. And it is a well-known fact that every official visit includes one or several official meals. If we try to name all the dishes that were served for the Russian president in different countries it will take us a very long time. The following are the most interesting ones.

In October 2003 when Vladimir Putin was in Thailand with an official visit he and his wife were served prawn soup, which is considered to be healing. Before the soup Putin ate roasted exotic shrimps in spice and vegetables. The dessert included tropical fruits, coconut ice cream and pumpkin pudding.

In 2003 Vladimir Putin also had ginner together with mechanizers in one of the villages in Krasnodar region. There the Russian president was offered borsch, lard and local tomatoes.

During his two-days visit to Kaliningrad Vladimir Putin preferred fish dishes. He and other guests ate fish soup, red caviar, smoke-dried eel and pancakes with strawberry.