USA determined to restrain Russia's growing power at all costs

The recent meeting between Russian and Belarussian presidents in the Russian resort city of Sochi, brought up the subject of the territory, which used to be taken by the Soviet Union. Abbreviation CIS (Commonwealth of Independent States) was used for a certain time in the West, but it did not become a popular term there for certain reasons. The three letters of the abbreviation do not characterize anything. Western media had a greater fondness for such word combinations as “post-Soviet area,” or “the former USSR.” These terms contain a reference to the past and characterize the indefinite present. 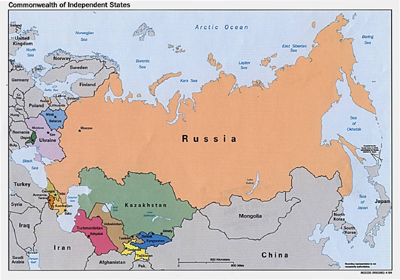 The collapse of the “empire of evil” marked the liquidation of one of the poles of the bipolar system of international relations. The USA became the only superpower, when the USSR stopped its existence. The American administration has been taking great efforts to preserve the monopolar world order since the beginning of the 1990s – the order, in which Washington plays the role of the only supremacist. The American administration has been trying not to let the new strategic force appear – the force, which would be capable of opposing the USA. The formulation implies Eurasia, first and foremost: Western Europe has not been exercising any vestiges of disobedience until the Iraqi campaign, while the rest of the world was either controlled or not endangering. The USA's major goal was not to let an independent strategic state run its own self-sufficient policy. As the wording suggests, small and non-independent organizations have a right to exist. GUUAM is a very good example of such an organization (it incorporates Georgia, Ukraine, Uzbekistan, Azerbaijan and Moldova), which was not supposed to be independent from the very first moment, when it appeared.

Russia poses a great problem for the USA on the assumption of its size, albeit regardless the intention of the Russian administration to make Moscow the center of the independent strategic formation. The creation of a circle of hostile states around Russia has therefore become Washington's goal #2. Russia's lengthy borders will inevitably lead to destabilization of the inner situation in the country. The center will lose its control of the province, and the nation will eventually disintegrate.

Needless to say that Russia's view about the former USSR is absolutely different. When Mikhail Gorbachev was at power, he gave the Soviet elite to understand that it would be a lot better to develop friendly terms with the West. The Western society does not perceive the end of the Cold War as the truce between the rivals of equal power, though. However, the idea turned out to be rather attracting: to ease the intense situation in the world and redirect funds from defense to the social field. The Soviet administration grasped the idea. Certain Russian analysts believed that the break-up of the Soviet Union could bring only good to Russia, because it was relieved of problematic territories. In addition, Moscow was not supposed to be responsible for republics' problems.

One may say that the Kremlin's policy on the post-Soviet space during the 1990s could be given the above-mentioned description. As a result, the situation could be characterized as geopolitical vacuum. Moscow had a chance to see that the territory of the former USSR was not the territory of Russia's influence only: other countries had their views about the space too.

Speaking about the countries of East Europe, former members of the Warsaw Treaty Organization – they had nothing to choose from, when the USSR broke up. There was a certain choice, though: either to re-organize their countries to let the West incorporate them, or stay isolated. However, the choice was not available for all states of the former USSR, except for the Baltic states. Initiatives, which the West suggested to new independent states, did not prove to be as attractive as they seemed to be at first sight. Ukraine is destined to play a not very attractive role too, despite the advantages that it has with the USA: a stable or an unstable buffer in the US-led game to restrain Russia.

Events of the recent two years proved that Russia does not have a thought-out strategy in the relations with former friendly republics. It is noteworthy that the Unified State of Russia and Belarus could become a “pilot project” of integration between former parts of the erstwhile powerful state.