Russian revolutions funded by the West

It is not idealistic freedom fighters who normally start up a revolution in some country of the world including Russia. In most cases, people, who had serious brushes with the law, become the driving force of a revolution. The overthrowing of an existing regime means the redemption of all crimes, the best way to get an amnesty and start over a new life. As a rule, revolutions are funded by foreign governments and intelligence agencies or by organizations that are linked to the above. The 20th century saw those methods spreading all over the globe. The German General Staff was sending huge sums of money to the Bolshevists in Russia during WWI. Over the last decade of its existence, The Soviet Union gave away about $200 million to various “revolutionary” movements scattered around the world. The US government financed a number of coups d'etat in Latin America. According to Russian and foreign experts, foreign financial support was also involved in almost all the recent-time revolutions that toppled the regimes in Belgrade, Tbilisi and Kiev. 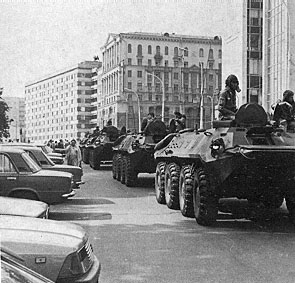 Yulia Timoshenko, one of the leaders of the Ukrainian “orange revolution”, joined the opposition and started preparing a revolution after the Ukrainian and Russian Prosecutors General accused her of committing a number of crimes including smuggling, tax evasion, and embezzlement at a very large scale. In 1996 she was allegedly involved in the smuggling of Russian natural gas worth 445 million hryvnas (the national Ukrainian currency). As the “orange revolution” was taking shape in Kiev, Interpol put her on wanted list, following the request from the Russian Prosecutor's Office. Her name was scratched off the list shortly after Mrs. Timoshenko was appointed new Prime Minister of Ukraine.

Unlike Mrs. Timoshenko, whose legal troubles seem to belong to the past, Leonid Nevzlin has yet to face the music. Mr. Nevzlin is wanted by the Russian Prosecutor's Office on charges ranging from tax evasion to the tune of 27 million rubles to theft of assets worth more than 3 billion rubles. The prosecutors charged Mr. Nevzlin with more crimes in July 2004. He was alleged to have ordered a contract killing of the Gorins, a family couple. It was also alleged that Mr. Nevzlin had been behind attempted murders of Yukos' rivals and competitors.

The authorities around the world usually pay little attention to requests filed by the Russian Prosecutor's Office. They believe, and with reason, that the Russian judiciary is politically motivated. Until recently Mr. Nevzlin has not been much concerned about attempts of the Russian Prosecutor's Office to get him extradited from Israel where he lives in exile. But things have changed. A few days ago the jury found Alexei Pichugin guilty of several murders and attempted murders. Mr. Pichugin is a former member of the security service of the Russian oil giant Yukos. Some participants of the trial claimed that Leonid Nevzlin had ordered the execution of those crimes. A representative of the prosecution said that “there is evidence that Mr. Pichugin, accused of organizing the murder of the Gorins and a few attempted murders, was following direct orders of Mr. Nevzlin.” This sort of accusations could lead to the extradition of Mr. Nevzlin, according to a recent statement issued by the Israeli Prosecutor's Office.

Mr. Nevzlin wasted no time regrouping. He soon switched  into the offensive for “the course of democracy.” He gave a few interviews to the Russian media, in which he promised to buck the Kremlin right till the end. According to him, estimated cost of the revolution in Russia would be $2 million. Now he reportedly pledged his support to Mr. Kasparov, Mr. Ryzhkov, and Mrs. Khakamada. In the process he also swept aside Mr. Chubais and Mr. Yavlinsky by directly accusing them of the plight of the Right opposition in Russia.

Though he officially quit the company in 2001, Mr. Nevzlin is a sole owner of Yukos at the moment (Mr. Khodorkovsky transferred his shares to him). The two men have known each other for many years since late 1980s, when Mr. Khodorkovsky launched the Youth Center for Science and Technology, his first commercial venture. Later the center would be transformed into Menatep, a commercial bank, and Mr. Nevzlin would become the main “negotiator” of Russia's oil empire. His skills can not be denied. He has a knack for making anybody accept his offer or ideas. Mr. Nevzlin was the head of PR department of Yukos, arguably the best PR department in Russia. Rumor has it that in the past Mr. Nevzlin had close links to the powers that be and the underworld. He apparently used his connections to resolve most complex disputes that targeted Yukos in the early years. An excerpt from the 1997 database of the security service of Most Group confirms the reports: “There is an officer of the Security Service Department, whose duties include liaison with the organized crime in order to put pressure on debtors and deal with other sensitive issues (hostage-taking, racketeering). Assigning a special officer to the job was Mr. Nevzlin's idea.”  Now Mr. Nevzlin seems to be playing politics, his latest pet project. Time will show how this game is going to end up.