Russian budget shortage to be compensated with people's income and oil

The Russian Finance Minister Aleksei Kudrin, who is generally believed to be a liberal politician, is leading his department against all principles of free economy. The ministry has recently blocked Prime Minister Mikhail Fradkov's initiative to cut the value added tax rate to 13 percent. Furthermore, the department introduced increased excise rates on mass consumption goods instead of canceling various duties and collections. 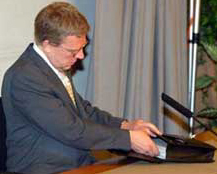 The Russian government will keep up step with Aleksei Kudrin over the fear of facing the disastrous shortage of the national budget, which has been forecast for 2006. Finance ministry officials believe that the spending of the Russian federal budget may exceed the income by 400 billion rubles in 2006. The figure is said to grow even further in 2007 – by 600 billion, the Kommersant newspaper wrote. It is noteworthy that the whole state budget makes up about three trillion rubles. Needless to say that it is rather a hard goal to find a reliable guarantee to cover the 1/6 gap in the budget.

Such a huge budget shortage has been caused by the Ministry for Economic Development and Trade, the Finance Ministry and the Healthcare Ministry. These departments have been rather persistent in their underestimations of the imminent state spending and the implementation of social reforms, first and foremost. Bad calculations resulted in massive actions of protest that swept across Russia and exacerbated the situation in the country nationwide. It goes about corrections to the federal law about welfare benefit cutoffs, which will cost the government the additional 105 billion rubles. Another 115 billion will have to be spent on the unscheduled pension raise (from March 1st) and five billion more rubles will have to be spent on public transport fees for those entitled to use federal benefits. It is said that the above-mentioned spending will be compensated with the help of Russia's Stabilization Fund.

In addition, it is planned to double the average pensions and wages for budget-related employees by 2008. The Stabilization Fund will not be  able to cover those costs. Mikhail Zurabov, the Minister for Healthcare and Social Development said that the shortage of the Pension Fund in 2006 will considerably exceed this year's deficit. The precise figure is not known, although it is obvious that it will be larger than 74.67 billion rubles stipulated in the budget 2005.

The incumbent Russian administration has only two reserves: oil and people's income. The question with oil can be settled easily. The Finance Ministry suggests raising the limit for oil prices, which will help direct the extra oil income to the Stabilization Fund. The ministry's current limit makes up $20 per barrel of the Russian Urals oil, whereas the real cost has already exceeded $34.5 per barrel. A barrel of Russian oil costs over $45 on the world market. Finance Minister Kudrin put forward the idea of fixing a new price on the level of $22-23, although it is not known, which influence the additional petrodollars will exert on the inflation rate.

The growth of excises on a certain range of mass consumption goods will inevitably boost the inflation rate, though. This is the second recipe of the non-profitable budget, according to the Finance Ministry. This time the goal is planned to be accomplished at people's expense.

The ministry has prepared a bill about introducing amendments to the Tax Code of the Russian Federation. It goes about the indexation of specific excise rate in 2006, the Novie Izvestia newspaper wrote. Tobacco excise rates will gain 15 percent, whereas the rest of the goods will have the 9-percent increase of excise rates. It brings up the idea that Russia will have to experience a massive rise in prices on almost all goods, taking into consideration the fact that oil and gas are sub-excise goods too.

According to experts' estimates, the increase of rates will eventually cause trouble to consumers, rather than producers. It has already become a tradition in Russia that any attempt of the state to make business pay ends up with a universal price rise. Strong alcohol drinks will add up to 25 percent to their prices, while the prices on cheap cigarettes might increase by 70-90 percent. It goes without saying that such a price rise will give incentive to the development of the black market. Expensive tobacco and alcohol products will become more expensive too, albeit it will be a smaller increase – by 5-10 percent.

Cars, petrol, engine oil, oil and natural gas are categorized as sub-excise goods. The transport constituent, in which fuel and oil are included, makes up to 20 percent of the Russian goods prime cost. Once the rates are raised, the prices will rise on everything too, independent financial analyst Andrei Kashirin believes.