Record oil prices could lead to collapse in Russian market

The price for Brent oil has reached a historic level, as for the first time it has risen above 70 dollars per barrel. If the USA does launch a military operation against Iran, experts think that the price for “black gold” could reach 100 dollars per barrel. But current prices are already high enough as it is: Russia is literally smothered with petrodollars, but continues to blow up its bubble on the stock market, as property prices rise without any sign of slowing down. However it could all end sorrowfully for Russia's economy when the bubble starts to burst. And according to experts, that is inevitable. Of course nobody is expecting a repeat of the 1998 crisis, but localized defaults are quite possible. 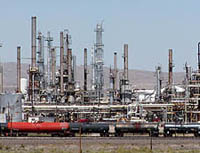 Record oil prices could lead to collapse in Russian market

On Wednesday the oil futures price for May reached 71.17 dollars per barrel. It would be wrong to refer to a panic situation on the oil markets, but it is not far off this, say traders. To a great extent Iran is contributing to the tension on the oil market. After US President George Bush rejected rumours about the possible launch of a military operation against Iran, Teheran replied that its country has successfully completed work to enrich uranium. Washington did not believe this or at least pretended that they did not believe it. However, by evening US Secretary of State Condoleezza Rice called on the UN Security Council to take decisive steps over Iran. “I think that the Security Council will have to pay serious attention to this action from Iran and that it will soon be time to take decisive steps so that people do not lose faith in the international community,” declared Rice.

The head of the US foreign policy agency did not specify what “decisive steps” the Security Council should take exactly, but many analysts thought that, having made this declaration, Rice had untied Washington’s hands: if the UN does not take the said “decisive steps”, the USA will reserve the right to act according to their discretion, and that would mean launching a military operation. It was almost the same situation with Iraq, when Washington was dissatisfied with the “decisive steps” taken by the international organization and decided to solve the problem by itself. We can see what this resulted in last time. Teheran’s position is difficult to fathom, but there is the feeling that it is consciously adding oil to the fire and is “asking for trouble” from the USA. After the report on the completion of the uranium enrichment was published, Iran’s President Mahmoud Ahmadinejad again announced that his country is not intending to put a stop to its nuclear development. This public slap in the face to Washington may cost Teheran dear, but it is difficult to say whether the USA will launch a military operation. At least, most analysts believe that they will not or are counting on Washington ’s good sense. That is why on Wednesday the oil futures overcame “only” one barrier. If there were real preconditions for the start of another war, then on Wednesday “black gold” would have cost not 70, but 75 dollars, or even 80.

For the time being the movement of oil prices fits into the confines of a normal upward trend which has arisen on the back of a whole series of events. Along with Iran’s declarations reports from Nigeria have added to the negative effect on the oil market. In Nigeria international oil companies have been forced to reduce production because of an armed confrontation between local tribes. On Wednesdaythe International Energy Agency(IEA) increased its forecast of the demand for OPEC oil in 2006 by 400 thousand barrels to 29.4 million barrels per day. At the same time the forecast for this year’s oil deliveries by exporters which are not OPEC members has been cut to 1.15 million barrels, which would be below the forecast of 300-400 thousand barrels a day.

Following on from oil, other goods on the commodities’ market are demonstrating record growth rates. On Tuesday the gold price on European markets broke the psychologically significant mark of 600 dollars per unit, which has stood since 1980. Silver followed gold and updated its 23-year old maximum price. Platinum prices reached a new historic record at 1095 dollars per unit. “There are practically no traders on the market,” noted one dealer. On Monday copper prices grew by 3%, and since the beginning of the year its growth has amounted to 35%. Experts explain the global growth in prices on all commodities markets with reference to the unstable situation around Iran, high oil prices and doubts over the stability of the American economy.

On the back of these international market trends, money is literally pouring into Russia. On Thursday the volume of the gold and foreign currency reserves reached a new high – 208 billion dollars. The stock market updated its historical peak, setting a new record of 1561 points on the RTS index. Experts think that that along with the inflationary pressure on the economy the stream of petrodollars carries with it the risk of the “overheating” of the financial markets. Analysts have long since stopped offering forecasts for a “fair” price for shares in Russian commodity companies. Quotations for these stocks long ago exceeded all predictions, and nobody is setting about predicting where the markets will move from now on. The market is highly overvalued, by at least 20 percent, think experts.

But for the time being this does not stop either Russian or Western buyers, who are continuing to pump money into the Russian market, thus blowing up its “bubble”. It is difficult to say how much patience or money investors will have, but it is clear that even a small correction could turn into a global collapse. The same thing is happening on the property market. When acquiring accommodation in order to obtain profit, investors are expecting a certain level of return. If it is lower, then money will be diverted to other spheres and a global sell-off will begin on the property market. However, this is being averted by a large excess of demand over supply. The large amount of free money is leading the population into debt for life: the size of consumer credit is growing from year to year, as is the share of non-repayment. Several banks are already incurring losses because their clients are unable to correctly calculate the extent of their wealth. A collapse in the stock market and property market will provoke a global crisis in the banking sector – the share of “bad” debts will grow many times over.

Such a pessimistic scenario need not take place in the very near future, but above all oil prices may be the impulse for it: if the crisis around Iran is resolved, oil prices may drop to 50 dollars a barrel. In that case some investors will undoubtedly rush to make a profit, withdrawing their money from Russian oil companies. This will be the beginning of the end for the bubble whose growth we are now watching.