Communists prepare to launch most powerful propaganda ever

Communists have declared propaganda war against the government. The Communist Party of the Russian Federation is currently considering the issue regarding methods of information and propaganda work of the party. The party has recently had a session of its Central Committee in the Moscow region, at which party spokesman Ivan Melnikov acknowledged that agitation activities of the party left much to be desired. 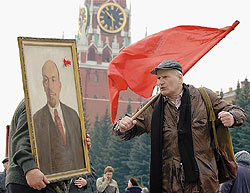 ”We must not hide from the fact that a lot of people perceive the Communist Party as a party of the past, a party of pensioners, a party of the erstwhile generation. There is a positive perception as well – “a party, with which it was good to live.” We have our followers, but it does not give the party a possibility to develop dynamically, it does not add more popularity to the organization under modern conditions,” Melnikov said.

”We need to realize that the popularity that we used to have in the middle of the 1990s was based on different factors. It was obtained in a different political environment, when we did not have to prove that we were the central party to stand up for working people's interests. We cannot return to those conditions now, nor can we practice previous methods of agitation. One has to improve the scientific aspect of our propaganda and intensify the development of actual issues of socialist theories. The program of the Communist Party needs to be changed to achieve a different level of agitation,” Ivan Melnikov stated.

Deputy Chairman of the Central Committee of the Communist Party said that communist deputies should be more emphatic and expressive in their work. “Certain elements of street protests could be taken to the hall of the parliament. If we succeed in organizing campaigns against state-owned mass media, it will be possible to say that we have covered a half of the matter,” Melnikov said.

According to Melnikov, communists should act as aggressive as possible. “We want people to listen to us and understand our viewpoints properly,” said he.

Communist leader Gennady Zyuganov stated that the party was conducting a very active work to prepare for the forthcoming election of the Russian president in 2008. “I treat elections very seriously,” Zyuganov told reporters. The party chairman, however, did not answer the question if he was going to run for the president in 2008, Itar-Tass reports. “A half of Russian politicians believe that they can take the office of the president. All of them think that they can be deputies. This is a disease, which can hardly be cured. But let them keep talking. We need to work,” Gennady Zyuganov said.