Recent events with the taking of the National Bolshevik Party's basement, which they proudly call a “bunker,” have spurred more discussion among the party members about the government's intention to paralyze their activity. It goes without saying that NBP members have already expressed their intention to take adequate measures in return. It was particularly said that that the “NBP project turned out to be very successful if the whole Putin Russia was struggling against it: specialists of politics, prosecutors, judges, and “wise men” of the Kremlin.” 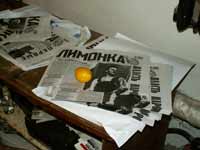 It is noteworthy that the attack on the headquarters of the National Bolshevik Party took place after the party's leader, Eduard Limonov, published his “Leader's Word” subtitled as “The Invitation to the Civil War.” Bolsheviks' online diaries about the recent attack were, therefore, added with remarks saying “you wanted the civil war yourselves, so meet its true mug.”

Eduard Limonov's followers refer to themselves as a “party,” although they still live on backstreet concepts. In spite of the fact that they still use methods of provocations and extremist sallies, they do not accept similar actions to be taken against them in return. If they occur, they are viewed as illegal. NBP members think in this case that it is the Kremlin that orders to take such measures. If their bunker is attacked, there is a cameraman from a central TV channel nearby, who arrives to film everything according to a special direction from the government.

The National Bolshevik Party released a statement, in which it was also said that Pravda.Ru's news stories about the taking of the party's bunker had been ordered by someone. The statement said that the information had been published 20 minutes before the attack happened. Most likely, this part of the NBP statement was meant to partially replace the information about the First Channel cameramen, which was removed from the party's corporate website. Furthermore, a Pravda.Ru correspondent was witnessing everything on the site of the incident.

Pravda.Ru was the first publication to inform about the taking of the National Bolshevik Party basement, although it is definitely not the news report to be proud of, at least to a certain extent. We learned about the forthcoming action in advance, which we mentioned in our first message on the matter. This aspect apparently confused the Bolsheviks, because the information did not come from any of their sponsors like The Kommersant, Echo of Moscow, Interfax or RIA Novosti. Unlike some of the above-mentioned companies, our correspondents will not play the role of political spies.

The discussion, which could be seen on NBP's online diaries, manifested the party's close links with youth “politicians” from other opposition movements. According to the diary, a certain leader of the youth Yabloko movement was one of the first persons to let the party know about the news message, which appeared on the Pravda.Ru website. The theme appeared in the Going Without Putin movement as well.

One does not need to dwell much upon this subject: the National Bolshevik Party and their followers are united with the "uncompromising" struggle against the Putin regime. It is also easy to guess, who the National Bolshevik Party can cooperate with on the matter. Pravda.Ru had an interview with Eduard Limonov about a year ago. Our correspondent asked the NBP leader, if he was ready to cooperate with the Russian oligarch in disgrace, Boris Berezovsky: “No one has offered us anything yet. However, we would cooperate, I believe, because it is necessary in everybody's interests. We need political freedom to participate in settling the fates of the nation,” Limonov answered. Answering a similar question about cooperation with Mikhail Khodorkovsky, Limonov said that Yukos's CEO “did not have any political organization.” The source of the “uncompromising struggle” becomes clear too.

An American citizen, who once worked in Pravda.Ru as an English editor, was fired about two years ago. The employee was fired because he changed the image of “The Worker and The Collective Farmer” (a proletarian symbol) in one of the translated articles to NBP's swastika. Having talked to national Bolsheviks, the editor thought that the two images designated one and the same thing: both of them could be used to symbolize Russia in the eyes of our Western readers.

It is a pity that several hundreds of NBP members have a similar opinion in Russia. This is what makes them distinctive from the majority of Russian citizens. Until recently, Pravda.Ru was trying to shed light on their activities. However, after the party accused our company of posting biased news, we have to cut any information from NPB's sources in our publications. It could be viewed as censorship to a certain extent. However, we live in a free country; Pravda.Ru is a private company. We will be running the policy, which seems correct to us, but not to Boris Berezovsky and National Bolsheviks. Period.

On the photo: Newspaper of the National Bolshevik Party, The Limonka