The volume of foreign investments made in the Russian economy in 2004 made up $40.5 billion and gained 36.4 percent in comparison with 2003, Interfax reports. The Russian government is not going to stop on this accomplishment. Finance Minister Aleksei Kudrin stated at a session of the government that investments in the basic capital would reach 3.3 trillion rubles in 2005, which is more than $100 billion. The volume of investments is to have a further growth in 2006, and to reach 4 trillion rubles, Kudrin said. The minister added that such optimistic forecasts became possible owing to the current positive ground for increasing the investment tempo. 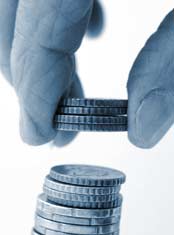 The development of public and state institutes, the improvement of Russia's entire investment attraction was the major factor in achieving an investment growth, Aleksei Kudrin said. For the time being, Russia ranks 11th on the list of investment-attracting countries. The minister said that the country dropped three positions down within a year. China has been viewed as the most investment-attracting country for three years running already. “As far as the country's competitive ability index is concerned, Russia takes the 64th place, according to estimations of the World economic forum. The USA, Germany, Switzerland, Sweden and Denmark are considered the countries with most competitive economies in the world,” Aleksei Kudrin said.

However, there are certain positions, on which Russia takes rather good places, the minister added. “Russia takes the 11th place on the quality of macroeconomic stability. It also ranks 30th on the level of market transparency, and takes the 35th place on the efficiency of the labor market and the level of innovations,” the minister said. “The quality of public institutions, the protection of property rights, corruption and the efficiency of financial markets are our weak points in this respect,” concluded the minister.

Author`s name Olga Savka
19:01
PMC Wagner fighters entrench themselves in northern and eastern parts of Bakhmut
17:35
Death toll from Turkey deadly quake rises fast to 1,500 and counting
18:54
Ukrainian soldier uses chainsaw and fire to release US howitzer from ice trap
18:30
Onet: Ukraine will lose in six months due to shell shortage
17:36
Russian troops defeat Ukrainian troops in Zaporizhzhia region
14:50
Number of foreign mercenaries in Ukraine continues growing
14:17
Russians buy more than 50 tons of gold in 2022
13:57
Russia will not talk to Ukraine. Russia will talk to the West
13:34
USA's plan to give 20 percent of Ukraine for peace hoax
12:51
Medvedev: Ukraine as a state to be devastated, go bankrupt and be turned into colony
Armed Forces of Ukraine drop chemical bombs from drones - DPR governor