Kasyanov to move Putin aside 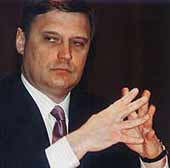 During a press-conference held February 24th in Moscow former Prime Minister of the Russian Federation Mikhail Kasyanov didn’t rule out the possibility that he would participate in the upcoming presidential elections in 2008.

According to him, in the course of the past year, state officials failed to follow previously outlined plan of the country’s democratic development. “In a year, the vector has changed its direction drastically. Many mistakes have been made. I will do my best to improve the situation,” noted Kasyanov.

When addressed with a question regarding promotion of his candidacy for the presidential post in 2008, Kasyanov said “Everything is possible! However, what’s more important is not who will become the next president but who will be at the head of the democratic movement in Russia,” reports REGNUM.

Kasyanov's speech has stirred various emotions among Russian politicians. Leader of the LDPR political party Vladimir Zhirinovsky considers it “a clear-cut profanation.” “He will never be a candidate for the post. He just simply decided to play politics,” stated Zhirinovsky. “As far as his viewpoint is concerned, that our democracy supposedly is heading the wrong way, everything is going just fine. Anyone who was either given the money or has his own money and wants to use it, is looking for a way to discredit current state of things in order to find and occupy his own niche. Yavlinsky, Nemtsov, Khakamada, Ryzhkov, Kasparov and Illarionov have already done it,” added leader of the political party.

According to Vice-Speaker of the State Duma Vyacheslav Volodin, since his dismissal, “ex-PM hasn’t given a single worthy advice concerning the overall improvement of socio-economic climate in the country”… Volodin is determined that Kasyanov’s attempt to enter big politics by means of such statements, “simply proves the fact that someone is really desperate to create an opposition leader out of him; however, such attempt seems to be rather harsh.”

“Kasyanov's statement was very unexpected for me,” said delegate of the State Duma Vladimir Ryzhkov, one of the key politicians of the democrat’s union project. According to him, Kasyzno's name has not been mentioned at any of the liberal’s meetings.

In the meantime, the issue of presidency for the 2008 presidential elections remains open. As far as the Kremlin talks go, the subject will gain its popularity in 2006. Business and liberal wing of today’s political elite Kasyanov’s candidacy appears rather suitable. Anyway, after the “Khodorkovsky lesson”, oligarchs are least likely to let their political ambitions show.

As far as Mikhail Kasyanov is concerned, in contrast to Fradkov, he managed to accelerate country’s GDP growth and managed to bring inflation down.